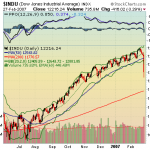 Tweet If you have not heard by now, Tuesday marked the worst single day in the markets since September 11th, 2001. This significant drop came on the heals of a broad worldwide market decline. While I don’t normally go into much detail in regards to the technical analysis side of investing, I thought this would […]

Tweet Traders who are looking to capitalize on short-term price movements will generally focus on individual stocks. This narrow focus does not mean you shouldn’t pay attention to the broad market as a whole. Understanding what drives the market and what influences the direction of the trends will set you up for success. The Big […]

Tweet At least according to Richard Conn Henry it could. Our current Gregorian calendar has been widely adopted and in use since the 1500’s, so why change it? He goes on to argue about the time that is lost due to the annual need to change schedules (he is a Professor) and date information on […]

Tweet These words from Ben Stein’s latest column at Yahoo! Finance sum up the philosophy of the great Milton Friedman, who died at the age of 94 earlier this month. We are surrounded by information and commentary on the state of the economy and the future of programs such as Social Security and Medicare and […]

Tweet Milton Friedman, the Nobel Prize-winning economist who advocated an unfettered free market and had the ear of Presidents Nixon, Ford and Reagan, died Thursday. He was 94. Friedman died in San Francisco, said Robert Fanger, a spokesman for the Milton and Rose D. Friedman Foundation in Indianapolis. He did not know the cause of […]

Tweet I stumbled across an interesting link over at Fark that plots famous quotes from experts in their time in relation to stock market activity. I particularly like this quote, just before the crash: “Stock prices have reached what looks like a permanently high plateau. I do not feel there will be soon if ever […]

Tweet Tom Van Riper at Forbes.com has an interesting article and slideshow that talks about how American families have changed financially over the past few decades. Mr. and Mrs. Median’s $46,326 in annual income is 32% more than their mid-’60s counterparts, even when adjusted for inflation, and 13% more than those at the median in […]

Tweet If you have been to any finance website or watched the news in the past 24 hours then you are aware of the new milestone reached by the Dow Jones Industrial Average. The average closed at the highest point ever at just over 12,000. At first glance this sounds great and our markets are […]

Do you want to be a millionaire? Would you like to see how I became a millionaire before I turned 30? Hello and welcome to Gen X Finance. My name is KC. Between saving and investing I was able to accumulate a net worth of over a million dollars before I turned 30. My Story I graduated from college early in 2000 with a bachelors in … END_OF_DOCUMENT_TOKEN_TO_BE_REPLACED