This is the beginning of our 2003 update.  This update I am doing a little bit different, I am breaking it up into several consecutive posts and on the last one I will post the net worth update for 2003 followed by a glance at our 2003 budget. By doing it this way I can give more details for the year. Let me know what you think of this format.

Okay, so I was never exactly a used car dealer.

A coworker of mine had a girlfriend who worked at a bank that dealt primarily with car loans. But not just any car loans… You know those advertisements with those crazy people who say we will finance anyone, they go something like-

“No credit, not a problem.”

“Bad credit, not a problem.”

“Been turned down for credit everywhere else? Come on down to us and we will get you into a car today!”

Businesses that give out loans to people with bad credit like this know there is going to be a high rate of default on the loans. So in the end the reposes a decent number of cars. This bank did not want to be a used car dealer so they just sold off the cars they reposesed really cheap. That is where I came in. I would pick up these cars at amazing prices, keeping in mind that the prior owner did not have the money they needed to take care of the car. 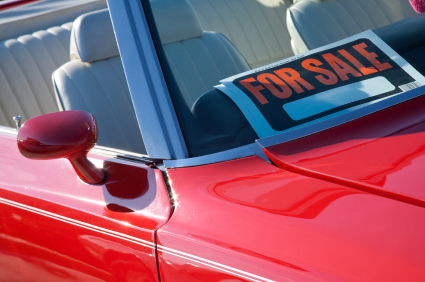 The first car I got was a Honda Accord.  It was the nicest newest car we had ever owned. This Accord was a V6 with power everything, sunroof, leather seats and all the other bells and whistles. As is common with repossessed cars there was a number of things that needed to be fixed on this car. I was pretty handy with fixing cars so it worked out well for use. I only had to put another $500ish into it and did a really nice cleaning before it was in mint condition. I remember after we got it thinking this would be a nice car to keep for ourselves. But as Corinne and I talked about it more we decided it was best to flip this car and bank the extra money so would have more money to work with on future deal. First I put it up on craigslist.org for sale. Then I also put a sign on it and parked it in a few high visible areas where other cars where parked with for sale signs. I priced it at $8,500 which was a few thousand below the blue book on it so it would sell fast. It sold in about a week to someone that was happy to be getting such a good deal on a great car. That was $4,500 profit in just two weeks!

So after that success we went ahead and did it again with a Ford Focus that was less than a year old but had been pretty messed up in an accident. I did as much of the work as I could but had to take it to a body shop to replace pretty much all the panels down the driver’s side. This one took me a lot longer to fix and sell, probably about 3 months in the end. But it was a free car to drive around for a while and then we were able to make a $4,200 profit.

After that my connection at the bank quit her job and I lost my inside scoop. It was fun while it lasted and it was a nice $8,700 to add to our bottom line for the year with not a whole lot of work.

I know $8,700 may not seem like a lot to some of you considering that it did take a little bit of work but it was a very important step in our path to a million. As I was going through all the numbers for this year and the following I saw that if we didn’t make that 8.7K we wouldn’t have had the money we needed for future money making opportunities.

The other important factor is that was we saved every penny from those deals.  We didn’t take a little bit out for a cool gadget or toy… we SAVED it all. Even though it was tempting to keep those cars and sell our old cheaper car we didn’t because we wanted the money for bigger better things.

Be sure to check back Monday of next week for the next installment of the series that will show you more of what happened to us in 2003.

As a final note I would like to hear from you guys. What have you guys done on the side to put some extra money in your pockets outside of your day jobs?

With the way used car and new car prices have shot up - we might need to learn the ins and outs of car selling!

I buy and sell cars on the side as well. It is a great way to earn a little extra cash as long as you are handy with cars that is. It also helps to have some kind of inside connection like you had.

Do you want to be a millionaire? Would you like to see how I became a millionaire before I turned 30? Hello and welcome to Gen X Finance. My name is KC. Between saving and investing I was able to accumulate a net worth of over a million dollars before I turned 30. My Story I graduated from college early in 2000 with a bachelors in … END_OF_DOCUMENT_TOKEN_TO_BE_REPLACED