Host a Tailgate Party and Save Money Doing It 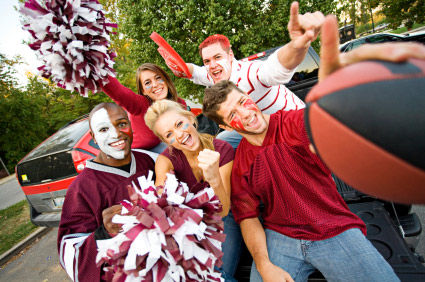 It’s all about strength in numbers. When times are tough, there is no better way for everybody to save money than to be able to pool your resources. This is a time tested method of saving and has been used for thousands years. Share your resources. Have everyone chip in a few dollars toward the supplies or bring a dish to pass and your good to go.

Not only does this help you save money, but it relieves some of the stress of hosting a party. The less you’re responsible for, the more you can enjoy the party and the game instead of obsessing over taking care of anything.

2. Do some of the cooking at home.

A lot of people use tailgate parties as an excuse to fire up the grill and cook everything from hot dogs to turkeys, which is great, but it can get expensive. You have to haul around a grill, buy propane or charcoal, and then all of the condiments. So, cut back on the amount of on-site cooking you have to do by making some of the food in advance.

My best advice is to go with a dish like chili. In fact, I have an award-winning chili recipe that will literally feed a crowd for about $25. The best part is you can make the chili a few days or even a week in advance if you want. Why stress out about buying all sorts of fresh meat, keeping it cold while traveling, and then cooking it on the spot when you can sit back and relax while a big pot of chili stays warm over a stove or in a crock pot?

Speaking of crock pots, that reminds me of another great tailgate recipe. Try my crock pot pulled pork recipe. Pork shoulder is incredibly cheap and you can again feed a bunch of people for as little as $15 or $20. And like the chili, this is something you can prepare well in advance to free up time during the actual tailgate.

3. Purchase what you need in advance and buy in bulk.

If you are going to have a tailgate party in October, start shopping in September. This can save a lot of money because you can shop the sales and look out for specials. You can find deals on bulk items at places like Wal-Mart or Sam’s Club. Even the dollar store will have all sorts of necessities like napkins, plastic silverware, decorations, and more. Keep an eye out for coupons and rebates. If you know you’re going to want a specific type of soda or beer for your tailgate if you have a few weeks in advance to plan you can wait until they go on sale and grab them when they are the cheapest. If you’re rushing to the store on Friday night like everybody else you may not find what you want and there probably won’t be good sales on some of the things you want.

If you’ve been tailgating at your home stadium for a number of years you probably already have your favorite spot picked out, and that’s great. But for those of you who may travel to different stadiums or are still relatively new to tailgating, take some time to learn about the venue. You can find out where the best places to tailgate are, what each location might cost, and maybe find a new favorite spot.

A quick personal example, but when we did tailgating back at Michigan State University, for a long time we always tried to get a spot in one of the tailgating locations relatively close to the stadium. The problem is those spots were very competitive and you’d have to wake up at about four in the morning to even have a shot and some of the locations even charged a heavy fee to park. Then when the game was over you were stuck in gridlock for a few hours just trying to leave campus. After asking around and learning more about the tailgating procedures we found another lot that was well away from the stadium, but it was huge, free, and right off a main road off campus so it was incredibly easy to get in and out. Not only that, but they had shuttles to the stadium to get you there and back for just a couple of bucks. We saved money and a lot of time by finding the new location.

5. Take the fewest number of vehicles as possible.

Going along with knowing your venue, there should be plans in place to take the fewest number of vehicles to the tailgate as possible. Instead of making 5 cars all drive separately, waste gas, pay for parking, and then go through the nightmare of trying to get spots all next to each other, arrange a meeting place before the game and have everyone pile into only the vehicles needed to carry all the party items and the people.

6. Plan your party well in advance.

Many incidental expenses can crop up because of a failure to plan. There is an old saying, and it goes like this: A person that fails to plan, plans to fail. Nothing would be more disappointing, or expensive, then getting set up to cook, but can’t light the fire because you’re out of propane or charcoal. Or maybe everybody starts digging in only to realize nobody brought napkins. What about making chili but only having knives and forks on hand and no spoons? Nothing kills the mood faster than realizing you or someone forgot a key party item.

Think about all of the things you’ll need for the party well in advance and make a list. Not only should you be keeping track of what you need to bring, but start delegating tasks to other partygoers with as much advance notice you can. People don’t want to be told a few days before the party that they are responsible for cooking something or going out and buying all the paper plates or beer. They want to have the same opportunity as you when it comes to taking time and finding sales. They will appreciate it and there will be less of a chance somebody “forgets” to bring what they were told.

Wait, wouldn’t this mean it isn’t a tailgate at all? In a sense, yes, it wouldn’t be the same, but if you want to save money and still get everybody together for the big game it might be better to just have the party at home. You can do all of the things you normally would at an actual tailgate, but you’ll be in the comfort of you or someone else’s home, won’t have to spend a lot of time and money on the day of the big game, and you can get by using a lot of the items already in your home to have a good time.

So there you have it, the top seven suggestions for making your tailgate party fun, affordable, and safe during a bad economy. Getting everybody involved along with some creative thinking will insure this tailgate party is as great as the ones before it, but with more money in your pocket after it’s over.

Do you want to be a millionaire? Would you like to see how I became a millionaire before I turned 30? Hello and welcome to Gen X Finance. My name is KC. Between saving and investing I was able to accumulate a net worth of over a million dollars before I turned 30. My Story I graduated from college early in 2000 with a bachelors in … END_OF_DOCUMENT_TOKEN_TO_BE_REPLACED

7 Great Coupon Resources
Saving Money With Coupons is Easy if You Know Where to Look Let’s face it.  We could all stand to have a little more money ...