Have you ever wondered how your spending stacks up against your neighbors? Maybe you think you have spending under control but since your friends are telling you exactly what they are spending it’s hard to say for sure. This is the fun thing about Bundle. You can poke around with spending data for all sorts of categories and even narrow it down to those in your same city or zip code in most cases. Now, you really can get an up close and personal look at what your neighbors are spending and see just where you stand.

One of the things I wanted to look at was my own personal spending on things like dining out and buying groceries. We don’t go out to eat much so I assumed that part of our budget would be fairly low. On the other hand, that also means we cook a lot of meals at home and that requires more grocery shopping. But I really didn’t have any idea what people in my area typically spend on groceries. Well, here’s what they spend where I live: 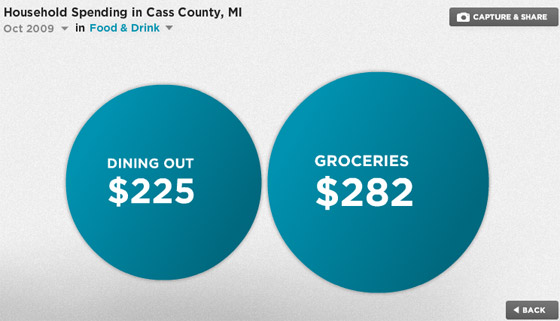 Shocked at the Results

The results turned out to be a little shocking. First, I was obviously thrilled to see that our decision to avoid going out to eat is saving us a lot of money. Aside from the occasional $6 or $7 lunch there isn’t much going on in that category. Our dining out budget probably rarely tops $100 in any given month. So, we’re spending less than half in this category than most of our neighbors, which is great.

But where do we stand on groceries since we need to buy food to cook at home? This is where I was even more shocked. $282 seems kind of low and I have a feeling we’re busting our budget a little bit in this area. We generally spend closer to $500 a month on groceries, usually a little over $100 each week. Yikes, that’s nearly double the average.

Of course, if you look at the totals, the average for our area is $225 dining out and $282 for groceries for a grand total of roughly $500/month on food as a whole. Then if you look at our average it’s $500 for groceries and $100 or less for dining out, so out total food spending is not totally out of control. And to be honest, it’s probably a good thing we’re only slightly higher than the average. The meals we cook at home often include things like steak, seafood, and wine. If we were to eat those kinds of meals at a restaurant it would be devastating to the budget. But when you find good sales at the grocery store an know how to cook it’s a huge savings.

How it Can Vary by Location

Ever wondered what might happen to your budget if you were to move? You can do that with Bundle as well. To see where our grocery and food budget stacked up against New York City I plugged in their information and couldn’t believe the numbers. 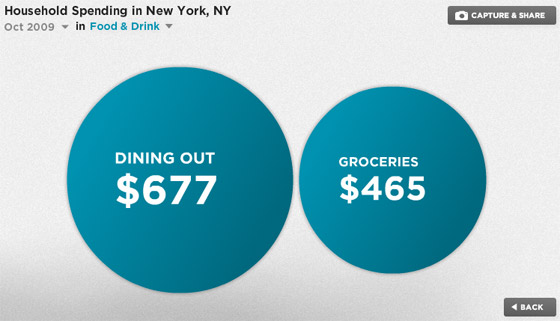 Wow, can you believe it? The average New Yorker is spending over $1,100 each month on food, or in other words, nearly $14,000 a year. Of course, the average income in New York is also probably higher and I’d be tempted to go out to eat every day if I lived in the restaurant mecca of the world, but that still seems like a lot of money. I thought if I plugged in our income level I’d see the numbers drop, but they did just the opposite and went up to almost $900/month on dining out and $560 on groceries. I think I can safely say that I’d never make it in New York on my income unless I wanted to sacrifice a lot of other things out of our budget!

Where Do You Stand?

So, now it’s your turn. How does your spending stack up against your neighbors? The information is only a few clicks away. Try Bundle and enter your zip code to see your results and then feel free to share them here. I think it would be interesting to see if my readers tend to be more frugal and are staying under the averages or not.

It is just the two of us and we spend $500.00 on grocery and about $60 a month dining out. It is so hard when you only have a limited amount for food, utility, and rent.

Activists on ships raided by Israeli commandos cast doubt on Israel's version of events that led to at least 10 deaths.

Hmm that's very interessting but actually i have a hard time understanding it... wonder what others have to say..

I am trying to come up with a budget for my husband and I and it seems the majority of our money goes toward eating out so I am going to try to set a realistic grocery budget and see how we look in 3 months.

For the price of one fancy restaurant meal, you can entertain a whole group of people at home. To me the math doesn't make sense, and as a consequence I do not dine out often, except for eat as much as you like sushi....LOL

Reduce your "dining out" expense by simply ordering water when available at no cost. Amazing how restaurantuers have managed to stop-gap increases on food prices yet either increased to doubled the price on beverages just in the past year or so.

I filtered the food numbers by my age group, income level, and by families with children and came up with $562. I feel pretty good because I'm a single dad with three kids at home and I don't usually spend more than $300 on food.

In South Florida my wife and I spend $200 month on groceries, and allocate only $40 per month to entertainment which is occasionally fast food or an inexpensive restaurant. We are getting into couponing and hope to cut our grocery bill down closer to $150 per month. We are aggressively attacking our remaining debt and cash flowing college at the same time.

The average American spends about 8 dollars a day dining out. This translates to 250 a month that can be saved!

I live in NY and I only spend $350-500 total on both groceries and eating out per month.

When I checked my area, I spent less than most people in my city in most if not all areas. This is a really cool program because it really puts things into perspective for the average consumer in terms of spending.

Bill and justme, you can certainly provide more granular comparisons with demographics such as age, male/female, married with/without kids, and even income limits. I did not go into that much detail for simplicity sake.

Also, the data is based on the merchant where the items are purchased, and here in Michigan at least, our grocery stores sell beer/wine/liquor. In fact, other than gas stations that's where most people will be buying their booze, so it would be lumped in with groceries. Obviously, other states with different liquor laws and specialty stores that sell these products may produce different numbers.

Very cool - thanks for sharing!

Hmm, I'm be *very* surprised if the "grocery" amounts you're comparing yourself to also include "wine". Wine to me would not be included in groceries.

I also agree with Bill - without further data on the size/composition of the families, you can't *really* compare.

This is very interesting to read. I must admit that there are times where we eat out a lot, more than our neighbor - for sure! I think we justify it because we have cut back on so many areas in our life AND it does reduce the grocery bill. ;) It's nice to see a comparison to see how we stack up.

It would be useful if you could tighten the comparisons based on family demographics, such as single, married, and how many children live in the household. Without those details, Bundle's averages really don't provide terribly meaningful comparisons, especially for grocery shopping.

It must be all those young and fabulous single people who live on ramen noodles and Mountain Dew who are skewing the grocery spending data!

Nevertheless, your post caused me to check out Bundle for myself. Thanks!

As a New Yorker, I would like to add a clarification that prices in NYC are more expensive in general than someone who lives in another part of the country. Even if I exclusively bought the exact same groceries (brand and all) that you did in Michigan, I would still spend more because the product costs more here (not including tax). Restaurant prices are also more expensive, so even if we both only went to Applebee's once a week, I would still spend more. It's not just a matter of how often or where you go, inflation is also a problem for many NYC residents. It's very frustrating indeed.

Do you want to be a millionaire? Would you like to see how I became a millionaire before I turned 30? Hello and welcome to Gen X Finance. My name is KC. Between saving and investing I was able to accumulate a net worth of over a million dollars before I turned 30. My Story I graduated from college early in 2000 with a bachelors in … END_OF_DOCUMENT_TOKEN_TO_BE_REPLACED

Quick Dining Solutions for the Family On the Go
Keeping up with your family’s increasingly hectic schedule can be a bit taxing at times.  Is it any wonder then that your evening meals often ...