And so it begins. For a number of weeks now the media has been obsessing over this milestone. When will we hit it? Is it a point of resistance and will it signal the start of a double-dip recession? Is it going to propel the bull market to new highs? So much speculation around a silly number, but we can’t help but pay attention to it. I guess it depends on how you view the market. If technical analysis matters, then surging over this level was a good sign. If you rely on fundamentals, then you couldn’t care less about what the Dow is at. And of course, you have the psychological effect. As meaningless as it may be, people see these big round numbers as some sort of milestone whether it means anything or not. It then often turns into a self-fulfilling prophecy as people react to the milestone.

It’s hard to believe, but I’ve been writing here for quite a while. In fact, I wrote a post back in October of 2006 when we hit the 12,000 milestone. At the time, it seemed like nothing but good times were ahead and the market was on an amazing rally. How did the world look in October of 2006? See for yourself: 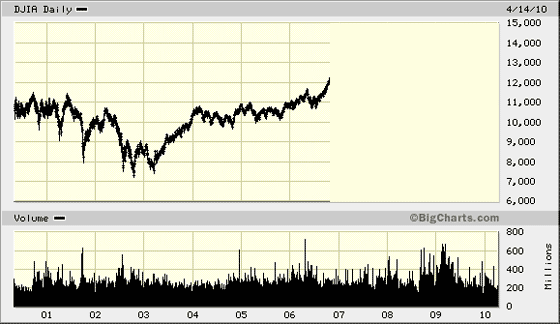 As you can see, back in late 2006 most of us were comparing the market to what happened since about 2000 and the subsequent tech crash. Relatively speaking, 12,000 did look pretty good and people were obviously optimistic. But how did things really turn out after hitting that milestone? 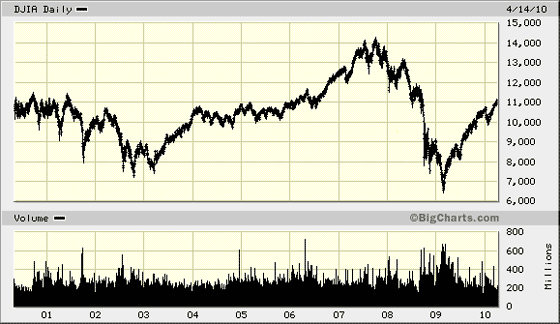 Obviously, it wasn’t all rainbows and roses. While we did continue to rally another 15-20% in the next year you can see how quickly things turned south. On the way down we crossed 12,000 fast, 10,000 faster, and to almost everyone’s surprise, closed in on 6,000 all in a little over a year.

So, now what does this week’s 11,000 milestone look like? As you can probably see, it’s anyone’s guess, but it gives the media something to talk about. That being said, I’m curious to see what regular folks think about the state of the market these days. Are better times ahead? Is this all just a big fake out that’s going to turn into another recession? I want to know what you think.

Once this fades, we are still over-indebted as a nation. This means we have to pay down debt or default. This is a slow process that takes years to get through with numerous ups and downs in the market.

Even based on historical metrics for the market, we are 25% overvalued at this point. While markets can remain overvalued for long periods, they typically don't do so with such negatives in the economy such as high foreclosures, unemployment, and rising commodity prices.

Agree with the previous posters. Currently have 5% cash and will increase my cash position in my portfolio if the market rises another 10-20%.

It *has* been nice to see the market going up again, but IMO it's a bit too much, too soon, with the economy only showing lukewarm signs of recovery. My prediction: We'll see the market continue to rally for the next month or two, then level off, then retreat 20-30 percent by the end of the year.

In my humble opinion, I think the market should do well at least until the end of summer. After that, it may go down again...

Do you want to be a millionaire? Would you like to see how I became a millionaire before I turned 30? Hello and welcome to Gen X Finance. My name is KC. Between saving and investing I was able to accumulate a net worth of over a million dollars before I turned 30. My Story I graduated from college early in 2000 with a bachelors in … END_OF_DOCUMENT_TOKEN_TO_BE_REPLACED

Poll: Is the Economy Really Recovering?
For the past year or two it's all been negative when we talk about the economy--stock markets were down, unemployment was rising, and more banks ...