Without a doubt, the higher prices at the pump can really be felt in more ways than one. It not only directly costs more to fill up your tank, but the overall higher cost of oil and gas trickles down to increase the cost of almost everything we buy. These higher prices can even indirectly depress the stock market and economy as well. So, in 2007, just how much did the price of gasoline increase?

As most of us remember, early on in 2007 we saw a very rapid increase in gas prices. The jump of an average of $2.20/gallon to $3.25/gallon in just five months was significant. This translates into around a 48% increase during that time. In the second half of the year, gas prices cooled off a bit but still remained well above the starting point on the year. For the entire calendar year, the US average gas price was roughly 39% higher.

What Does This Mean for the Average Driver?

If we strictly look at the effect of higher oil and gas prices on our immediate bottom line when filling up our vehicles, in terms of dollars, how much more are we paying? We’ll stick with averages, but the average person drives around 12,000 miles per year. As of 2004, the average passenger vehicle got an annual average of around 23 miles per gallon.

Basic math then tells us that for a typical person with a typical car, they use roughly 522 gallons of gas per year. 522 gallons of gas at the January 1st price of around $2.20 would come out to $1,148. Those same 522 gallons of gas purchased on December 31st would have cost $1,592, or an increase of $444. Keep in mind that this is a worst-case scenario and does not at all represent what happens in the real world, because obviously nobody buys a year’s supply of gas just once a year. Since most people will fill up at regular intervals, this is the same as dollar cost averaging. So the actual effect of the annual price increase is diminished a bit.

But How Can I Make Money When Gas Prices Are Increasing 40% Annually?

I know what you’re thinking, and trying to find a way to make 40% on any type of investment a year is not easy to do. Well, you’re right, but you don’t have to be a stock picking guru to pull this off when the answer is right under your nose. Why do gas prices generally go up? Because oil prices are going up or supply is reduced. So, wouldn’t it seem like a reasonable idea to invest a few dollars in oil so that you can minimize the effect on your bottom line? Let’s take a look at some of the best options. 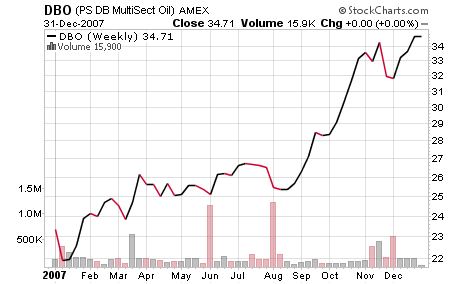 We’ll start right at the root of the problem, and that is crude oil itself. This ETF is designed to track the Deutsche Bank Liquid Commodity Index – Optimum Yield Oil Excess Return. Yes, that is a mouthful, but it basically means it tries to accurately reflect the changes in the light sweet crude oil sector, which is the type of oil used to produce gasoline. As you can see, in 2007 this ETF did very well. In fact, it returned just over 42% in 2007. 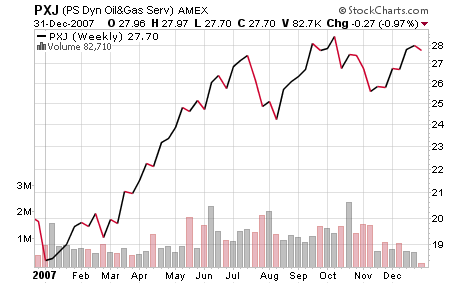 This ETF is a little different in that it corresponds to the Dynamic Oil Services Intellidex Index. What this really means is that it tracks companies in the oil services industry, not oil itself. But generally speaking, the more a commodity costs, the more the companies that deal in the commodity can profit from. In 2007, it saw an almost identical overall increase to that of the price of gasoline at just over 39%. 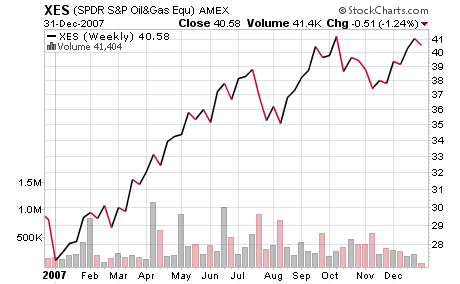 Here we have a similar ETF offered through a SPDR compared to Powershares, and this fund directly tracks performance of the S&P Oil and Gas Equipment and Services Industry. Many of the same holdings as PXJ, but some slightly different weighting. Again, this fund saw a 2007 return of 35.6%. Again, very close to keeping pace with the price of gasoline. 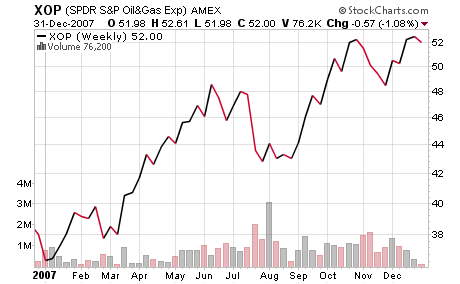 And I throw this one in there even though it is less dependent on the actual price of gas and more on the exploration and production, but again, since these companies deal with the commodity, they are generally going to be able to make more money as it increases in price. Much of the same here with an annual return of over 35%.

So, how can this really benefit you? Well, by investing in a little bit of oil, you have two primary opportunities:

As you can see from above, with any of the major oil-related ETF options, you can almost completely offset or possibly make money on rising oil prices relative to what comes out of your pocket at the pump. So, if you plan to spend $1,500 on gas this coming year, you could put $1,500 into an oil investment, and if prices continue to increase, you end up breaking even or possibly coming out ahead (all dependent on actual market performance and whether or not your money is in a taxable account).

Not only can it directly hedge against the prices at the pump, but think of this commodity as a long-term investment. All you have to do is consider the law of supply and demand. Oil is a very limited resource, and if our demand continues to increase or even stay the same, the supply continues to dwindle, what happens to the price? It goes up. Until we begin to make a major push towards alternative fuel sources, this classic case of supply and demand will continue, and if you have the opportunity to, you might as well make some money from it.

It’s a Start, but Not the Solution

This doesn’t mean you should go out and invest a bunch of money in oil or that it will completely offset any losses you see from increased gas prices, but it is a start. Consider that if you would have invested just $2,000 into DBO in early 2007, you would have probably made more money on that return than what you lost in higher prices at the pump.

While you don’t want to go too heavy on any single investment, you may want to consider what effect adding just a small portion of an oil investment has on your overall diversified portfolio. And while the increase in oil prices may not directly go into your pocket if you’re investing it, you can at least rest a little easier knowing that while it might cost you $5.00 more each time you fill your tank, you’re getting that back in your investment.

While it is true that an oil fund that tracks an actual commodity, such as USO (which I didn't mention) and DBO, are treated as limited partnerships, so the taxation is handled differently.

But, the other two ETFs listed are your typical ETFs that invest in the oil sector, and buys the companies within that sector just like any other ETF.

If you wouldn't be comfortable trading commodity futures outright, then you shouldn't be buying a commodity ETF. Nor should you invest in something without understanding how it works. That is why registered funds have a prospectus, and if you don't want to read it before making an investment, that's your own fault.

Know what? All the holders from last year regreted their purchases when they filed the tax in April.

Oil prices have always been weird. Just look at the past few weeks and look at where gas prices have went. Here on the east coast it has gone from $3.20 one week to 2.79 the next.

As a contrarian play you could look at alternative energy ETFs. Powershare's Wilderhill Clean Energy Portfolio (PBW) is just one of many options.

If the environmentalist in you doesn't want to sink money into Big Oil, why not fund the future?

This is some great advice. I currently hold three different oil/gas related stocks in my portfolio (XOM, AAV, FRO), and it has helped to keep my overall portfolio flat during this downward spiral.

Or...we could use electric cars.

Dea, since these are ETFs, they trade just like stocks. That means virtually any brokerage account will allow you to purchase these types of investments. TD Ameritrade, Schwab, Scottrade, Zecco, TradeKing, etc.

OK, point well taken. Now how and where can I make an investment?

and it still well, that ihave 1.6 litres engine on my citroen.

I don't think Oil being so high is going to last. Eventually we will drop as the US economy slows. In the short term we should buy companies like Exxon Mobil since the stock made about 25% in the last year while oil went up 50%

Do you want to be a millionaire? Would you like to see how I became a millionaire before I turned 30? Hello and welcome to Gen X Finance. My name is KC. Between saving and investing I was able to accumulate a net worth of over a million dollars before I turned 30. My Story I graduated from college early in 2000 with a bachelors in … END_OF_DOCUMENT_TOKEN_TO_BE_REPLACED

A Visual History of the Stock Market From 1996 – 2007
This article was published in November of 2007 With the current volatility in the market, it causes people to begin questioning their investments and wondering ...