If you have not heard by now, Tuesday marked the worst single day in the markets since September 11th, 2001. This significant drop came on the heals of a broad worldwide market decline. While I don’t normally go into much detail in regards to the technical analysis side of investing, I thought this would be a great opportunity.

So let’s examine the DJIA over the past 9 months: 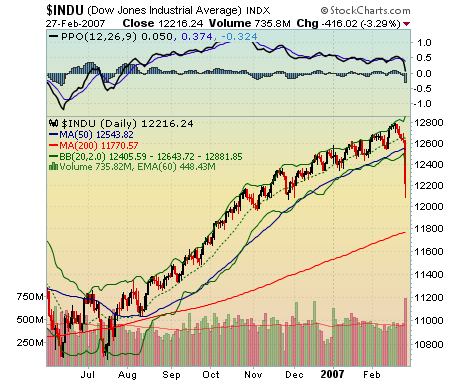 As you can probably see there has been a very clear trend since August of last year. The market has been trending upward without much trouble. The first thing I would like to bring to your attention is yesterday’s large drop. That is the long red line on the far right of the chart. This line is significant for two reasons: it broke below the 20-day moving average (blue line) and the bottom Bollinger band (green line). If you look back through this chart it has not done this since July. These two lines are key support lines so the drop below both is quite significant from a technical point of view.

The next thing to consider is the fact that there were many signs this reversal was due. It should be no surprise and analysts have been discussing the correction for a while now. To spot the potential for a reversal you want to look for something called negative divergence. In this chart I used the PPO oscillator at the top of the chart to illustrate the divergence. If you look at the black PPO line it was trending upward in correlation with the DJIA price. This signals a strong trend.

But more importantly, look at what happened starting in late October. The PPO indicator reached its highest point and began to trend downward. Since this point in October the PPO line has continued to trend down while the DJIA was trending up. This is the negative divergence I mentioned above. This happens when an indicator trends the opposite way of the underlying price. This is generally an indication that the trend is about to reverse.

What does this mean?

All of this information is interesting but what does it mean for the future of the market? While nobody can say for sure we can use some of this information to make an educated guess as to what is in store. Since the markets have been demonstrating this divergence for many months indicating a possible reversal combined with the fact that the market dropped significantly below a few major support levels it is safe to say that at least a short-term trend reversal has occurred.

Will this new trend last days? Weeks? Months? It is difficult to say and there are many factors at play when it comes to the direction of market movement. Given the significance of the single day drop, current talk of a recession by the Fed and other technical indicators I would guess that this trend is here to stay for at least a few months. I don’t think the market will give up all of the gains of the past year but I do think a period of sideways to downward trending markets will be the norm heading into summer.

What is an investor to do?

If you have a properly allocated portfolio with a long-term investment horizon, do nothing. It is easy to think about making changes to your investments with such a significant event affecting your portfolio but you have to remember that this is just a small blip on the screen over the course of 20 or more years for your portfolio. Remember, the markets have been on a tear the past few years and giving up 10% after this long run won’t be so bad after all.

If you are trading individual stocks on shorter time frames you may need to adjust your strategy a bit. If the bulls are giving way to the bears it will make finding good buys harder to find. Paying attention to which sectors weather the storm the best will likely make the best candidates. Otherwise it may be time to sell short or avoid trading as much until a trend is more completely defined.

Regardless, ignore some of the media hype about how the markets saw their worst day in almost seven years or how other world markets saw the worst day in decades. Yes it is important and may be factual, but they are reporting for ratings. If you stick with your investment objective and don’t let the hype and doomsday news get to you everything will be fine.

Do you want to be a millionaire? Would you like to see how I became a millionaire before I turned 30? Hello and welcome to Gen X Finance. My name is KC. Between saving and investing I was able to accumulate a net worth of over a million dollars before I turned 30. My Story I graduated from college early in 2000 with a bachelors in … END_OF_DOCUMENT_TOKEN_TO_BE_REPLACED

Understanding Broad Market Behavior is Important When Trading Stocks
Traders who are looking to capitalize on short-term price movements will generally focus on individual stocks. This narrow focus does not mean you shouldn't pay ...