The Money Writers Portfolio Project: An Inside Look at My Portfolio and Performance This Year

The Money Writers Portfolio Project: An Inside Look at My Portfolio and Performance This Year

This week The Money Writers are doing a little group project in highlighting and analyzing our investments. It is interesting to see how different the portfolios strategies being used stack up against each other. The participants and YTD results of this project are:

In order to analyze any investment, you really have to put it into perspective. It isn’t the raw numbers that determine how well or poorly a portfolio is doing, but how it is doing relative to the goals and objectives. Obviously, capital preservation or a time horizon of just a few years will be much different than someone looking for growth over the next few decades.

So, for my portfolio I’m going to be taking a look at both my wife’s accounts and my own, which share a common goal: retirement. Obviously our total picture is made up of other assets such as a house and cash in the bank, but these aren’t really a part of our retirement goals in terms of setting up an asset allocation, so they won’t be factored into the performance or overall portfolio.

Let’s first take a look at the overall makeup of the portfolio. Nothing too out of the ordinary here as you can see it is about 73% stock, 21% bonds/cash, and about 6% coming up as other. In this case, the other is some commodities in the form of a few ETFs. Prior to the first of the year, I held closer to a 60/40 mix of stocks and bonds, but given the downturn that began in the 4th quarter of 2007, I started to contribute more money into stocks, which gradually moved me to the mix above. I didn’t sell any bond holdings, but just focused on putting more money into stocks. The stocks will recover from a down market faster than bonds, so I’d rather buy while the prices are cheap. 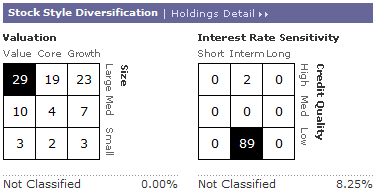 While it is important to look at the overall asset classes, it’s also worth looking at the types of holdings within those classes. Looking at the graphic here, you can see that I favor large companies, and I’ve spread the holdings out fairly evenly across value and core, with a slightly higher concentration in value. Obviously, we’ve seen a trend for growth stocks to outperform this year, but I’m looking long-term, and I feel having a little more value will pay off.

The most surprising part of the portfolio comes in the bond category. With a little more than 30 years until retirement, conventional wisdom would suggest that my portfolio should consist of almost entirely stocks and virtually no bonds. That may be the case, but those recommendations treat bonds as a safety net, or something that is very conservative in nature. As you can see from the graphic, I concentrate on high-yield, or junk bonds. This is not your typical bond allocation, and as we’ve seen with the current market conditions, these bonds can take a beating just like stocks.

That information is all well and good, but how does this portfolio stack up? Well, I’ll go ahead and let the graphic do the talking.

As you can see, and as expected, things are pretty ugly. It could be a lot worse, but the past 12 months haven’t treated me very well. What really killed me was December of last year. My portfolio deviated significantly from the S&P and I lost 6% more than the S&P. That is a huge deviation, and it was in large part thanks to the Hotchkins and Wiley Large Cap Value Fund (HWLIX) which dropped over 16% in December. It was a great fund that steadily beat the benchmark by double-digits since 2002, but has recently reversed course.

This isn’t a fund I’d typically invest in, but it is one of the few large-cap value funds available in my wife’s 457 plan, and we’ve had the fund for over 5 years, and it was certainly worthwhile a few years ago, but that may be changing. I’m looking at some alternatives to fill that void right now.

But overall, the performance has held up pretty good. If you take out December, I’m quite pleased. And looking at the YTD numbers as of the close on Friday, the 25th, we’re looking at a net return of -13.32%, and the S&P over the same period is at -13.35%. And to put things into perspective, in 2006 I managed to get a 19.8% return versus the S&P’s 15.8%, and remained virtually identical closing out the 2007 year. So, all things considered, I’m not unhappy. Sure, I could be doing better, but given our time horizon and risk tolerance, it is performing as it should be.

Some Final Stats and Top Holdings

Across the board, our average expense ratio comes to 0.7%, and Morningstar says that a typical portfolio such as mine would normally have an expense ratio of 1.37%. So, I’m doing okay at keeping costs down for the limited options in our 401k and 457 plans, but could do a little better. A big reason is again, that Hotchkins and Wiley fund that has an expense ratio of nearly 1%. In the past, the stellar overshadowed the expense, but now that it is underperforming and still charging so much, once we find an alternative, I’m sure I can cut overall expenses to around 0.5%.

And just to give you an idea of what holdings make up the bulk of our investments: