This article was published in November of 2007

With the current volatility in the market, it causes people to begin questioning their investments and wondering where we’re headed. In my profession, I have to work with uneasy clients daily, and it can be difficult to remind them that the stock market is constantly moving and generally goes through cycles. The market can’t go up indefinitely, nor will it go down indefinitely. More often than not, we’ll see periods of growth followed by periods of volatility or sideways movement, and then have a period of falling stocks that is followed by more volatility before the cycle repeats itself.

A Glimpse of Our Future by Looking at the Past?

Some claim that there is a four year cycle that the market follows, and there is some evidence to that. Of course, nothing is certain and the time periods of the cycle can vary, but there is some truth to it all. For this example, I’m going to take a look at the Dow Jones Industrials Average from January 1st of 1996 through today (November 26th, 2007). I’m using the DJIA simply because it is one of the more widely tracked indicies and it doesn’t have a heavy concentration of technology stocks that saw the most exaggerated data during this time period. 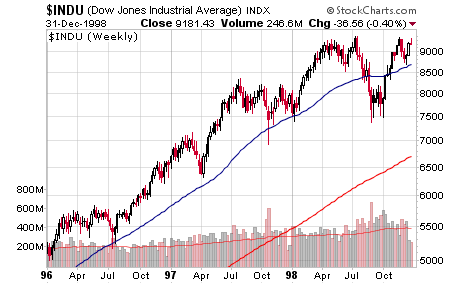 Ahh, yes. The roaring 90s. It was during the mid-to-late 90s that everyone was a stock trader. With the Internet becoming popular and the easy access to buying and selling stocks for the Average Joe, people were flooding into the market looking for the next company that was going to double or triple in the next three months. Think back to this time–how many people did you know that were afraid of the market or selling everything and moving to cash? Nobody.

Even though in 1996 the upward trend was just a continuation of previous years, the market seemed unstoppable. From 1996 to 1999 the DJIA nearly doubled in value. So, the money continued to pour in during 1999 as well… 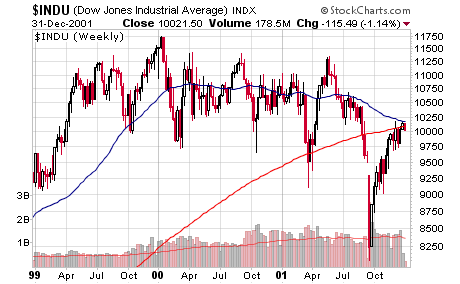 1999 came and the market was still headed up. People who were naysayers a few years ago are now coming around and finally looking to get in on some of the action. Well, it sucks when you’re late to the party. As the new millennium came, the stock market reached record highs, but suddenly stalled and became very volatile. For the next year there was little direction.

This volatility soon gave way to a sell-off in 2001 as panic began to set in. Those who have been in the market for a few years quickly took their gains, and the selling quickly forced prices lower, which scared many of the people who just recently got into the market. As the media began to talk about how overvalued many stocks have become, especially the internet companies, people continued to unload their shares… 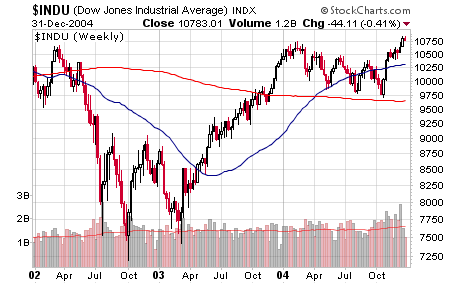 This continued throughout 2002 and the DJIA gave back most of the gains it saw during the late 90s. The NASDAQ fared much worse. When the selling subsided, the markets again became very volatile from late 2002 through early 2003. The markets began to pick up steam again in late 2003, but remained almost flat through 2004 as there was little direction… 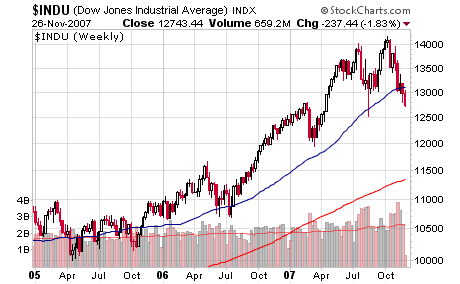 Most of 2005 was nothing to write home about as the markets were basically drifting sideways. Once 2006 rolled around, the market again started to rally. For the next two years, the DJIA tacked on over 30% and set new record highs. Again, if you asked most people early this year or last year about their investments, they probably responded very positively. Who wouldn’t? If you look at what has happened since April of 2003 to just a few months ago (almost 4 years), the DJIA has returned over 75%.

As investors, most of us tend to forget about all of the good years and only focus on the bad. The broad markets have been heading up for about four years, so the thoughts of what happened in 1999-2002 are well behind us. But now that the markets are volatile, there is a lot of talk about the subprime mortgage industry, a weak dollar, and everyone begins to completely forget about how well the past four years have been and only focus on the last few months or weeks complaining how bad it is. Things can certainly continue to get worse, but you have to look at things in context.

Remember, what goes up, must come down. Not only does the stock market cycle, but there is a business cycle as well. We will always have various times that are great, and those that aren’t as great, but you can’t lose sight of the big picture.

Take a look at the following 12 years in a colorized format. Green identifies periods of strong growth. Yellow indicates a period of volatility or no real direction, and red shows a period of a downward trend. Based on this, is it any surprise that markets are becoming volatile and possibly trending downward?

For even more similarities, scroll back up and look at the first chart from 1996-1999. Now, scroll down and look at the 2005-Present image. Notice how similar they are? The markets went up for completely different reasons, yet are behaving almost the same. All you have to do is look at the following few years to see what might be in store for us over the coming year or two. Will history repeat itself? There is no way to tell, and anything could happen to make all of this information worthless, but you do have to at least consider the past trends and understand that there is a chance the market will behave similarly and we’ll enter a period of significant decline.

Sure, the market may be a bit unstable right now, and we may certainly be headed for a time where the market falls further, but that shouldn’t be of much concern to you if you’re investing for the next 10, 20, 30 or more years. If you want to try and time the market or predict what the next hot sector is, that’s fine, but the best thing most people can do is to just continuously invest in a diversified portfolio. If you keep buying even as the market falls, you’re just adding more shares at a lower price.

Could you make more money if you only invested at the low points and sold at the high points compared to dollar cost averaging? Sure, but the likelihood of succeeding on a regular basis is low. For most people, the best thing to do is to just continue investing bi-weekly, monthly, or quarterly into the same diversified portfolio regardless of market conditions. When markets are choppy or headed down, you’re just buying stocks or funds on sale. All you have to do is look back a few years to see that even though the market might go down, it will eventually come back up again.