If you haven’t had the opportunity to catch an episode of Doomsday Preppers, National Geographic Channel’s new series, you’re missing out.  Where else are you going to learn how much time, energy, and resources go into prepping?   The hour long program follows average Americans as they prepare for TEOTWAWKI (The End of the World as We Know It).

From building the ultimate shelter to securing munitions, the Preppers featured on the show are working toward protecting their families, friends, and communities from the potential aftermath caused by the economic collapse of our nation, a global pandemic, nuclear war, and solar-flare induced power failures.  Their approach is simple and widespread.  The people that prepare for disaster survive.  The ones that don’t will do anything they can to take resources away from you.  That’s why most Preppers spend a good amount of their days acquiring and inventorying their supplies. 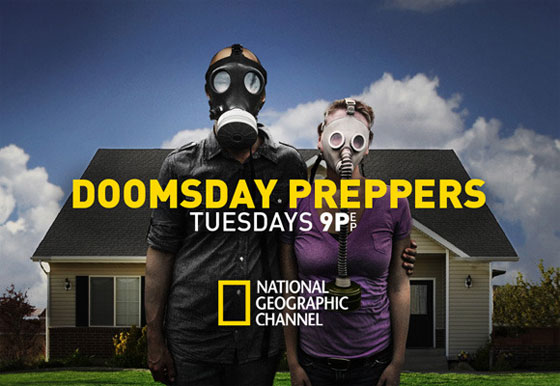 Prepping is highly systematic and requires time and money.  The individuals, couples or families featured on the show have spent hundreds of thousands of dollars and years of their lives preparing for the worst.  One of the most important things a Prepper does is stockpile food and water.  They purchase items with long shelf lives and fill container after container of H2O.  Most Preppers have enough food to feed themselves and their families for years.  They also keep medical supplies on hand and keep their electronics in faraday cages that prevent the entry or escape of an electromagnetic (EM) field.

Other precious commodities that Preppers have on hand in the event of a crisis include alcohol and precious metals.  They believe that many items will be hard to come by so they want to have items on hand that they can use to barter with.  Many Preppers purchase several hundred dollars worth of liquor monthly to trade with even though they don’t drink alcohol.  They know that these valuable items can help them secure necessities like sugar, flour, and rice.

Even if you don’t watch Doomsday Preppers or don’t know a thing about TEOTWAWKI, it’s important to be prepared.  A number of different scenarios could threaten your sanctity and security.  Weather-related phenomena, economic uncertainty, and war as well as diseased animals and crops are all good reasons to prep. At the very least you’ll want to have an emergency savings account set up.

A long, cold winter commute is enough to make you a believer.  If your car was to break down in the middle of a snowstorm, the food, water, blankets, and First Aid Kit you keep inside your vehicle will pay off.  If you get laid-off or fired from a job, the extra food you have stockpiled in your pantry can see your family through some hard times.  Prepping takes time and money but it very well could be something you want to look into doing.