As a soon-to-be published author of a personal finance book, I never thought I would catch myself saying that I think that bargain shopping has become a borderline obsession for many people. I say this as the Swiffer Duster promotion on Facebook locks up within seconds of being announced and entire shelves of Nivea Body Wash are wiped out at every retailer in town. As much as I love saving money, I can’t help but be disgusted by people that empty hundreds of items into their shopping carts merely because they can save a little money.

This “Extreme Couponing” is reminiscent of the show “Hoarders”. Proud shoppers take camera crews into their garages and storage sheds to show off their bounty. One woman had enough toilet paper stocked up to last her several decades. Even with a large family to care for, I have yet to see how anyone can feel good about storing 400 tubes of deodorant in their home. 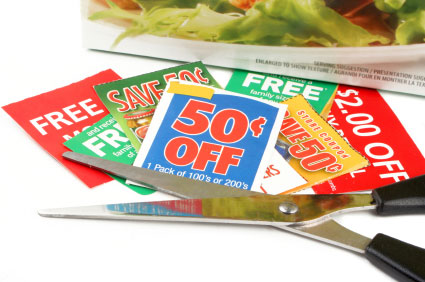 Yes folks, there is such a thing as too much. Before you get a bit obsessive with the coupons, think about others and what they might need. When you take everything off the shelf, I have to wait days for another supply to come in. If the company can’t keep up with the demand, they may not even refill the shelves for weeks. The Nivea Body Wash is a perfect example of this. My coupons expired and there’s no product to be seen. I doubt that will change for awhile.

Don’t get me wrong, I’m all about stockpiling and saving money. I am not, however, going to spend entire days sorting coupons by alphabetical order. I am also only going to get the items that I use. Just because Fixodent is free this week, it doesn’t mean that I need a lifetime supply of it. If it isn’t something that is a necessity, I won’t pick up multiple packages of it. And, I never clear out shelves. I don’t care how good a bargain it may be. That’s simply not courteous.

I offer suggestions on how to stretch a dollar. I do not condone “Extreme Couponing”. Maybe it’s just me, but more and more people have jumped on the coupon clipping bandwagon. As much as I like to hear about people making the most out of their money, I do not want to watch a TV program where a woman walks away with thousands of dollars worth of free groceries but still manages to gripe out the clerk because she forgot to take fifteen cents off the order for a reusable shopping bag. That’s not being resourceful. That’s greed, plain and simple.

okay i do coupons. I help feed 330 families . We do this in Nov and Dec.I enjoy saving. i don't just give them thanks Giving dinner. i give out food for the week or day there not in school. If i could get couponers to donate the coupons i need it could feed more families. So in my case coupons are great. Yes its a hard job but i wouldn't change it for the world. So if you wanna donate coupon look me up. serenity house elkanah ministry @face book.com. In the summer we use coupon for our bank pack block party for inner city children So i love coupons. Praise YAHUAH for coupons.

I marvel at those who can sustain and have the time for finding and clipping coupons. They have like this scrapbook full of them, all arranged accordingly. I use one or two when I find a good deal but sometimes, it makes you buy things you don’t really need.

I have to agree; sure, it's awesome that people are saving 97% off a thousand dollar order, but um, what about when I come in after to buy that toothpaste you hauled away in multiple baskets? It's sort of ridiculous. I only condone it for the guy who used his extreme couponing to stock up food pantries.

Many of these extreme couponers spend (according to them) the equivalent of a full time job in time to collect, organize, and plan the coupons. I like spending my 1 hour every few weeks to buy the groceries that I actually need. I don't have the room to stockpile things, and I only need to buy groceries for my boyfriend and myself (and he and I trade off who buys groceries). I will collect a few extra of something if there's a good deal, but only if I know I can use it or if it has a long enough shelf life that I can get to it before it goes bad.

I've become a bit "anti-coupon". It takes time to manage them, and often the generic is still cheaper. I try to focus on only getting ones for the items I use a lot.

I'm also working on cutting way back on stockpiling. I don't have much storage space, and to some extent, stockpiling just leads to more clutter in my life. And spending money before I need to.

I hardly ever use coupons. I just try to buy stuff I actually use when it's on sale. I also don't buy more than I can use before its expiration date. What's the point in buy 50 moxes of Kraft Mac & Cheese when half of it will go bad before you get around to eating it?

Having said that, it'd be nice if extreme couponers used their skills to buy in bulk for food pantries and troops overseas.

I agree with you 100%. Crazy, organized people should be taking their love of thriftiness and helping out food banks instead of hoarding in their basements!

I could not agree more. I had to stop shopping at my regular store because someone always comes along and cleans out anything with a sale and a coupon.

Do you want to be a millionaire? Would you like to see how I became a millionaire before I turned 30? Hello and welcome to Gen X Finance. My name is KC. Between saving and investing I was able to accumulate a net worth of over a million dollars before I turned 30. My Story I graduated from college early in 2000 with a bachelors in … END_OF_DOCUMENT_TOKEN_TO_BE_REPLACED

Get a National Park and Federal Recreational Lands Pass and Save Money
Do you love national parks but hate the idea of paying expensive fees to gain entrance into them? Does your vacation itinerary involve multiple states ...