Going from Two Incomes to One

Going from Two Incomes to One

How to Live on Just One Income

Households with dual incomes are at a significant advantage. Typically, a married couple will share many of the same resources (housing, insurance, groceries, utilities, etc.) yet have two sources of income to pay the bills. As long as spending doesn’t get out of control it can really help a family save money. While this is an obvious benefit, there’s also a drawback to this type of situation. Families who rely on two incomes may need that income out of necessity for raising children, paying off debt, or any number of reasons. In addition, it’s easy to experience a little lifestyle creep when you have two incomes, which can stretch your budget a little tight.

That’s when disaster can strike. When you’re suddenly faced with the reality of going from two incomes down to one it may present a very difficult financial situation. Today we’ll walk through a common example, point out some problems, and then touch on some solutions. 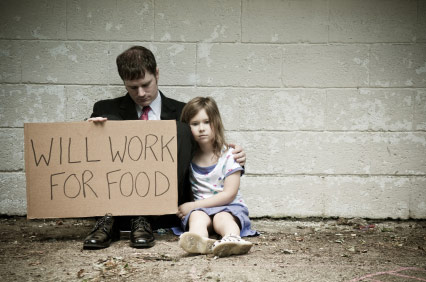 When Two Incomes Become One

Allen and Anne have three children and were doing quite well. Allen worked as a machinist and Anne worked for a furniture company. They lived in the rural south, so rent and bills were relatively inexpensive when compared to  the rest of the country. Together they earned around $60,000 per year. Not a lot by some standards, but considering that their bills were $1,640 per month, or $19,680 per year, they were meeting their obligations and saving towards a new house. Anne had the family covered under her health insurance and both had retirement plans. Anne contributed to a 401(k) and Allen had a pension with his company.

In December of 2009, the bottom dropped out. Anne’s company did massive lay-offs and she lost her job. Allen’s company went under and he lost both his job and his pension was frozen as the company declared bankruptcy. It took around six months, but Allen eventually found employment again, although at a reduced salary. Anne is still looking, but for now they are surviving on Allen’s pay alone, which equals about $29,000 annually. That’s just a little less than half of their previous income, but because it offers health benefits it’s a must-have job. Their savings are depleted as they struggle to make each bill payment. Anne said “It’s been really rough, especially for the children. While they say they enjoy having Mom home, they miss the little vacations we used to take together. School shopping was never a problem before, but this year we really had to scrimp and save and watch prices to get them what they needed. It’s been very scary for all of us.”

Back in the 1950’s and 1960’s having a Mom who worked outside of the home was rare. In today’s society, it often takes a two person income to live well. What does a household do when they have lost half of their income? What steps can Anne and Allen take to insure that they still have money for a rainy day?

The first thing a family needs to do is to calculate their fixed expenses by creating a budget. Fixed expenses are those that have to be paid on a regular basis and are typically the same amount each month. These include rent or mortgage payment, utility bills, insurance, car payments, and grocery expenses. If costs can be cut here, they should be, but not at the risk of harming the family. For example, Allen and Anne realized that because they were renting and saving for a house, they were more fortunate than some. Allen said, “We talked about it as a family and realized we really hadn’t tapped into our house savings account. Rather than use that money, we kept it in savings and all agreed that we would rather live in a smaller apartment for a few years and have our house sooner.” By downsizing their apartment, Allen and Anne were able to save $200 a month, which they put directly into their housing fund.

Because Anne is not working and they live in a town which runs a bus service, they sold the car they still owed money on and put the money they received into making sure that the car they owned was running properly and was reliable. By cutting back to one car they not only eliminated a car payment, but were also able to save money on their auto insurance. Saving money on car expenses alone can be a savings of a few hundred dollars a month.

Anne and Allen also looked at their discretionary spending. They cut the weekly Tuesday dinners out and instead, they now peruse cookbooks and come up with meals that the family can cook together. Anne said, “We used to go out every Tuesday night for dinner, sometimes Mexican, sometimes Italian, and sometimes Chinese. Now we are learning to cook our own Italian, Mexican, and Chinese foods. It’s a lot of fun, and we are saving over $30 a week.” Allen and Anne also downsized their cable package and did away with Anne’s cell phone. The three children share a pre-paid phone, which is used when they go on school trips or sporting events away from home. When Anne and Allen totaled their savings from dining out, cell phones, their cable plan, and their gym membership, they realized that they were now saving $270 a month.

Knowing they didn’t want to tap into their retirement account unless it was an absolute last resort, they did a 401(k) rollover with Anne’s retirement account. What was left of Allen’s pension fund had the option of being cashed out or rolled over as well, so they opted to roll it into an IRA, which they now make monthly contributions to. In addition, Allen’s new job offers a 401(k) which he pays into each week. Allen had to cut back, but he still contributes 2% of his pay which is enough to get the company match. They did admit that they had to stop payments to the children’s college funds for the time being realizing retirement savings is a priority when you consider the late start they got.

While they have had to make cutbacks, they have found a silver lining. Anne and Allen admit, “We were so busy with all our gadgets and toys that we never spent much time together as a family. Instead of everybody playing video games or texting on their phones we now have time for some frugal family fun.”

Anne and Allen agree that the best way they dealt with a paycut was by talking about their options and making their budget and sticking to it. They said, “At first it was scary, we didn’t even want to mention the word budget to each other. Then we realized if we didn’t budget, we were going to be in trouble and possibly end up trying to live our old lifestyle by using credit cards.” By budgeting, making sacrifices on the size of their apartment, and cutting back on the “extras,” they were able to reduce their spending while still saving.

Nobody wants to be in this position, but it’s all too real for many. It can be a difficult time and depending on your current situation, it can feel nearly impossible to overcome. Instead of letting your emotions take control, be sure to step back and take a few deep breaths. It won’t be easy, but you can find a way to come out on top if you prioritize and make the right decisions. Before you know it, that second income will be return once again.