Buy and hold investors have felt like this tried and true strategy has failed them, and for good reason. The past decade has been downright ugly when it comes investing in the stock market. Over the past ten years, many will point out that their money would have done better in a savings account, or even under the mattress. It’s true — stocks have done terribly over the past ten years, and extremely bad over the past 18 months — but using that as an excuse to get out can prove costly.

This past March has been a perfect example. From the lows early in the month, markets rallied over 20% in just three weeks. If the market saw a 20% gain over a whole year it would be hailed as one of the better years in decades, but this move happened in a matter of days. It was one of the shortest and strongest rallies in over 60 years. When the market moves that fast, it’s nearly impossible for the average investor to spot the trend right from the beginning, and by the time they do, the rally is over.

Visualizing Why People Were Selling

A lot of people were getting out of stocks early this year. I know that those of you with a true long-term vision see the importance of planning for the future and buying even when things are headed in the wrong direction, but we have to remember that it’s very difficult for most people to stomach continuous losses month after month like we’ve seen. To illustrate this, you’ll see a chart of the Dow below that goes back to November of last year. What’s different is that I’ve blocked out the last month’s worth of data. So, this is the chart you would have seen back in the first few days in March. 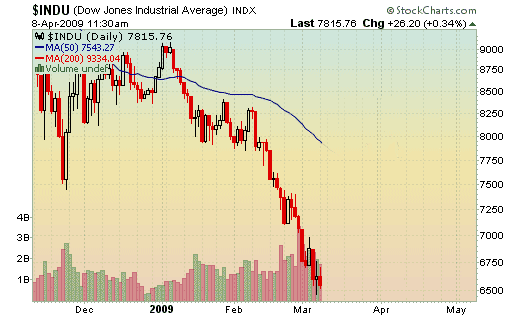 Look at that drop. From about 9,000 at the new year the market plunged about 2,500 points, or around 28% in just two short months. If you were pulling up your account information or looking at this chart back in late February, I don’t doubt that your stomach was tied into knots. At this stage, there was absolutely nothing to reassure us that a market rally was coming. The markets were dropping like a rock, and the prospect of the Dow hitting 5,000 was not at all out of the question. You can probably see that given how bleak the picture was in February, it was no surprise that more and more people were taking their money out of stocks.

From a personal perspective, I can say that I have never seen more people so desperate to get out of the market than I did right around the end of February and early March. My phone was ringing constantly and people had just had enough. Many of these were people who have stayed the course this whole time, have continued to buy even while the market is down, but the sharp decline in early 2009 was the last straw. I don’t blame them. There was really no good news coming out and the possibility of any upside in the market seemed nil.

What a Difference a Few Weeks Make

Ask anyone in the first few days of March if they thought the market could rally 25% in just a few weeks and you’d just get a bunch of laughs. And if you predicted such nonsense, you’d probably find yourself the next guest on The Daily Show with Jon Stewart getting blasted like Jim Cramer. Markets aren’t supposed to do that. Of course, markets aren’t supposed to drop 50% a year either, but we have to expect the unexpected these days.

Common sense would tell you that those who got out of the market a few months ago were right, and they were protecting themselves from the continued drop that was sure to follow. Well, not so fast. Let’s look at the same chart as above, but we’ll include what happened in March. 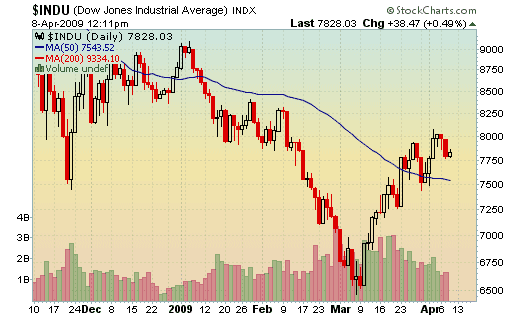 Look at the difference. The first chart above looks as if the Dow is in a free fall that won’t stop for anything. Give it a few short weeks and it gained nearly 1,500 points. After the first week of gains the media was happy, but many still cautioned it was just a temporary glitch. Another week of gains, and some disbelief sets in, although the news was still welcome. And after yet a third week of gains, you had some people proclaiming we’ve bottomed out.

I’m not here to make any predictions as to what this means for the future, but I did want to point one thing out. And that’s the fact that the market moves fast, and it can and will leave you behind. If you are a trader and monitor the markets carefully, I’m sure you could have spotted many buy and sell opportunities, but for the average investor, this is simply a classic example of why you shouldn’t try and time the market. If someone sold near the bottom in February, how long did it take before they bought back in? A week? Two weeks? If you look at the chart, it’s pretty clear that had you sold near the bottom and waited just a few short days before getting back in, you probably missed out on the bulk of the initial gains. In a worst case scenario, you sold low and bought high and just compounded your losses even further.

If you’ve continued to stay the course, you’re probably viewing the March rally as a breath of fresh air. It’s been a brutal year and a half, so any positive gains are welcome relief. But investors who may have sold earlier this year are starting to show signs of remorse. Granted, we still haven’t climbed back to where we started the year, but the recent rally has illustrated just how hard it is for most investors to get in and out of the market at the best time.

Just as I met with a lot of people in February and early March who wanted to sell, I’ve met with a number of the same people in recent weeks who are visibly upset with their decision. They have realized their mistake and know that if they were to buy back in now, they are doing exactly the opposite of what they have always been told, which is to buy low and sell high. To make matters worse, many of these investors also stopped making their regular investment contributions into their previous allocation and instead switched to a money market or fixed account. At the very least, had they continued to invest the same and still put some money into stocks, they would have realized a nice gain on those funds.

What Does the Future Hold?

Even after all of that, what does this mean for the future? Unfortunately, I don’t know. Nobody knows. There is just as good a chance that the market will again continue to slide and drop below levels we saw just a few months ago as it is that this turns out to be a long-term turning point. If you’re trying to draw conclusions from what the March rally, you might as well flip a coin. You’ll be hearing a lot in coming weeks from pundits about what the future holds, but when you realize how many had no idea this kind of rally was imminent, you can rest assured they can’t predict what’s going to happen in the next few months either.

One thing is for sure. The market will continue to move, and it will often move fast. Just when you think you’re certain as to where it’s headed, it’s likely you’ll be proven wrong. Keep that in mind going forward. This might be just a bear rally and we’re still going to be searching for new lows in coming months. It could also be a turning point that leads to a long-term recovery. Your guess is as good as mine, so make sure you’re making investment decisions based on sound principles. If you let emotions get the best of you, you’ll probably end up missing an opportunity or regretting your decision.