Poll: How Much Do You Spend on Utilities Each Month?

Poll: How Much Do You Spend on Utilities Each Month?

Utilities are a part of life for almost everyone. Whether you own or rent, you’re responsible for paying for utilities such as electricity, gas, water, sewer, etc. Granted, renters occasionally find leases where some or all utilities are included, but ultimately you’re still paying for them as they are tied into the monthly rent. For those of you who do have to pay for utilities each month based on what you use, how much of your monthly budget is going toward keeping the lights on?

I’m a fan of statistics and love poking around with numbers to see what people are spending their money on and how I compare, so the other day I was looking at the U.S. average in utility spending. So, I hopped over to Bundle to take a look at the total U.S. average. Here are the results encompassing all age and income groups. 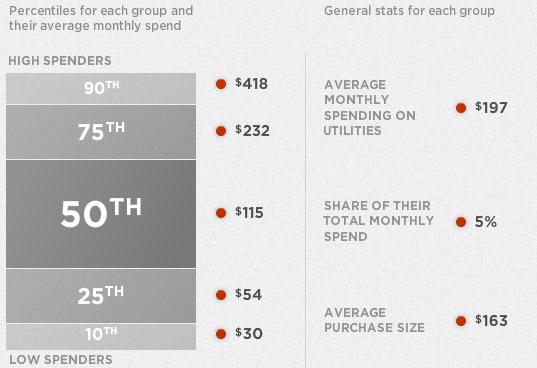 As you can see, there’s quite a range. Low spenders are getting by on just $30 a month while others are spending over $400. The average household is spending around $200 and the median household is at $115 a month. It also reflects that people on average are spending 5% of their monthly budget on utilities.

That’s interesting, but where do I fit? That’s what I was curious about after receiving our latest electric and gas bills. Here’s our average monthly utility breakdown:

That brings our total to about $128 a month. Of course the electric and gas numbers are averages and they do fluctuate with the seasons. But for us, in the summer when we run the AC but aren’t running the heat, the electric bill may go up to about $90 and the gas may drop to $20 and in the winter the electric bill drops quite a bit while the gas bill goes up. In the end, it tends to average out as a whole. We also have a well so there’s no bill for city water.

So, given our current utility spending it is comforting to know that we are right in the meaty part of the curve. Considering we have long cold winters, some hot months during the summer, and a reasonably large house to maintain it looks like our energy costs are actually pretty good.

Now it’s your turn. How do your utility bills stack up? Does it seem like you’re paying a lot more than you should be? Once you compare yourself to the national average above, be sure to change the data to compare it with your specific location which can give you a far more accurate pictures and put your costs in perspective with your neighbors. For the sake of the poll below, just try to ballpark an average monthly number since there are obviously extremes from one season to the other. And only include things such as electricity, gas, sewer, water, etc. Don’t include things like cable, internet, phone service, etc.