Robert Kiyosaki is Off his Rocker (Again) – Is The 401(k) Really the Biggest Scam Ever?

Robert Kiyosaki is Off his Rocker (Again) – Is The 401(k) Really the Biggest Scam Ever?

If there’s one thing I love about checking the Yahoo! Finance columns it’s that I know every time Robert Kiyosaki posts something I’m going to either laugh out loud or shake my head in disbelief. This past week has proved no different, and the self-proclaimed financial guru who shouldn’t be offering financial advice has done it again. This time he says that the 401(k) is the biggest scam ever.

Seriously? Kiyosaki is going to go as far as call the 401(k) the biggest scam ever, steer people away from them, and then provide no viable alternative? Sometimes I have to wonder how he’s still writing this column. So, let’s take a look at his arguments against the 401(k) and see if any of them are valid or if they are just little tidbits and stats taken out of context. 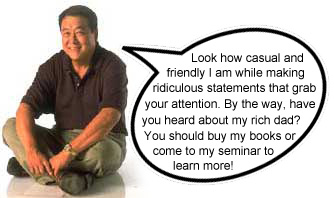 Let’s start right from the top when Kiyosaki references both a recent article out of Time Magazine and More Magazine. Time talked about some of the problems with the current 401(k) system, but Kiyosaki quickly jumps to Jean Chatzky’s More article. She wrote an article about using low-interest savings to pay off high-interest credit cards. In the article she states, “There’s no better guaranteed return on your money (except, perhaps, a 401(k) match).” Before jumping to Kiyosaki’s analysis, this is common sense, right? I mean if you take some of your money sitting in a savings account earning 1% and pay off a credit card charging 20% APR that’s a guaranteed return on your money since you’re going to be avoiding all of that costly interest.

Not so fast. Instead of taking the point of that article at face value Kiyosaki latches on to the “except, perhaps, a 401(k) match” part and blows everything out of context. He goes on to say:

Huh? Jean’s point was in regards to using money earning little to no interest to pay off debt that’s charging high interest. Then she adds that getting a 401(k) match is also a guaranteed return that might be even better. So why does he jump into the fact that over the past ten years the average 401(k) balance is down slightly. Where did Jean say that the 401(k) is a guaranteed return? Nowhere. He simply picks up on a few words that don’t even relate to the underlying article and runs with it to try and prove a point.

Look, I can prove a point, too. Vanguard points out that 60% of 401(k) accounts are higher in value today than they were pre-stock market crash in 2007. People were saying it would take a decade or more to recover from this two-year market slump, but here we are just two years from the start of the meltdown and more than half of investors have recovered nicely. Hooray, look at all the good news! But I digress. My point is that anyone can cherry pick any data set they want to make their argument look good.

Riskier As You Get Older

He likes to point out one more little tidbit from the Time article that says: “The older you are the riskier a 401(k) gets.” This blanket statement is just plain dangerous if people read it without thinking about what it means. Of course, Kiyosaki doesn’t bother to explain how a 401(k) can become riskier as you age, but instead leaves it hanging so that it can strike a little fear into readers.

First of all, a 401(k) is only as risky as you make it. Period. Nobody is forcing you to put 100% of your nest egg into a small-cap fund. Nobody restricts a 60 year old from allocating their 401(k) into a no- or low-risk fund. Can a 401(k) become riskier as you age if you leave yourself completely exposed to stocks? Of course. But this has nothing to do with the 401(k) itself and has is the result of people making poor decisions. You can’t argue that the 401(k) is the biggest scam ever simply because some people take on unnecessary risk late in their life and get burned when the stock market has a drop right before they want to retire.

It doesn’t matter what type of account your money is in: 401(k), IRA, Roth IRA, taxable brokerage account, CDs at the bank, or real estate. If you don’t take the proper measures to adjust your exposure to risk as you age and your situation changes you can get burned. The 401(k) is just a few lines of tax code and there’s nothing in the code that says these accounts will get riskier as you get older.

Kiyosaki then goes on for a few paragraphs rambling about how he’s concerned for the baby boomers, predicts the economy will collapse, and points out how the Fed continues to print money. These are legitimate concerns and something we all need to consider going forward. But really, he’s just restating what he does in almost every column. He loves to point out how we’re all doomed and the rich are going to just keep getting richer without giving any actionable tips on how to do what the rich do. Sounds like a good salesman to me, lure people in so they will buy your books and attend your seminars.

One item worth pointing out was in regards to those who are counting on their home as their biggest asset. It’s true that this is going to be a huge problem going forward as many people, especially boomers, have sunk most of their wealth into their homes and are going to be faced with the prospect of having far less wealth than they expected. And as he mentioned, even if home values don’t continue to decline there’s a good chance that local municipalities are going to need to raise property taxes. This can put people in quite a bind, especially those who are already retired and now suddenly have more expenses.

In typical Kiyosaki style, he comes out swinging with wild accusations and doesn’t provide any real answers. The 401(k) is such a scam, you shouldn’t save money in one, and we’re all doomed! So, where do we turn, Mr. Kiyosaki? He of course alludes to “the rich” many times, thus hoping to get people to buy his very own products making him even richer, but for the rest of us we’re left wondering. If the average person shouldn’t be putting money into a 401(k), how are they going to be able to afford retirement?

Kiyosaki’s primary teachings revolve around generating passive income, primarily through real estate and businesses. This is great and all, but what is your regular guy making $40,000 a year going to do? Can this person go out and pick up a few rental properties? Should they try and become an entrepreneur? Betting your retirement on income generating rental properties alone or giving up your job to start a business is just as risky as betting your retirement on the stock market, and it takes far more capital and opens you up to other risks you don’t have when simply investing your money. If you don’t have the cash to buy real estate outright what do you do? You borrow money. Now you’ve taken on debt to purchase something that is not guaranteed to go up in value and not always guaranteed to generate income. How is that less risky than a 401(k)? All of Kiyosaki’s methods for generating passive income and building wealth are good ideas and great ways to earn an income, but it isn’t feasible for 99% of the population and is not a substitute for simply saving money for retirement.

I still don’t know how someone can make that assertion. The 401(k) in its current state is certainly not without faults, but calling it a scam is just plain silly. How is a tax-advantaged account that allows you to optionally enroll and then allow you to choose from various investment vehicles a scam? Sure, we have issues right now with some companies charging higher fees, not offering the best investments available, and some employers not offering the plans at all, but those things don’t make the 401(k) a scam.

It doesn’t matter if you have a 401(k) or not, but you need to plan for retirement. If you aren’t saving in a 401(k) you still need to be accumulating assets to provide for you in retirement. It doesn’t matter if you’re saving money in a savings account, dumping it into a 401(k), buying stocks in a brokerage account, or putting money into real estate. If you aren’t saving and subsequently investing that money somewhere, you will end up retiring broke and unhappy. It’s not the investment vehicle that’s the problem. It’s the simple fact that people don’t save enough, period. And even if they do, they can often still end up in bad financial shape in retirement because they made foolish investment choices. So, is the 401(k) a scam? I don’t think so. The only scam here is the one Robert Kiyosaki is operating by getting people riled up in an attempt to generate more sales of his own product so that he can laugh all the way to the bank. His underlying message that people should become more entrepreneurial and put their money to work for them is a good one, but telling people that 401(k)s are a scam is the wrong way to go about it.