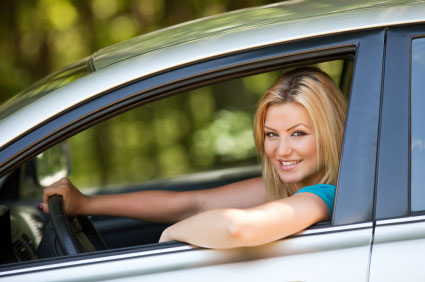 What this means is that in the early part of the loan term a much larger percentage of your monthly payment is being applied to interest than at the later part of your loan. To get an idea of how this works go ahead and pull up this auto loan calculator. If you view the report of the preset data you’ll get a monthly breakdown of payments.

As you can see, in the first year, nearly 30 percent of your payment is going towards interest. In the last year of the loan it’s a mere two to six percent on average. So in reality, during the first few years of the loan you may very well pay thousands of dollars in interest each year, but in the last year or two you’re likely only paying a couple of hundred dollars in interest.

So you really have to look at where you are in your loan to determine whether paying it off early results in the savings you’re looking for. Typically, the closer you are to the end of your loan the less benefit there will be to paying it off early because almost your entire monthly payment is now being applied to the principal. So, run through the calculator with your loan terms and see for yourself how much money you’d actually save and then decide if it’s worth paying the loan off early.

Also keep in mind that your auto loan, mortgage, or other installment loan may have a significantly lower interest rate than other debts you carry. With rates possibly as low as 2 to 5 percent, ask yourself if it’s really worth saving what could be just a couple hundred dollars by paying it off early when you’re carrying other debts with much higher interest rates and costing you more. Sure, it’s nice to enjoy the feeling of having one less monthly payment, but if the math doesn’t work, the math doesn’t work.

Finally, consider the situation of having a bird in the hand or two in the bush. Especially if you are deep into your loan and have already paid the bulk of the interest, does it really make sense to use a bunch of available cash to pay it off early when that money could be used elsewhere why you enjoy the remaining low monthly payments? Run the numbers and don’t be penny wise and pound foolish.

You should also consider how your interest is calculated, auto loans at one time were notorious for using the rule of 78 which fronts all of the interest payments.

Do you want to be a millionaire? Would you like to see how I became a millionaire before I turned 30? Hello and welcome to Gen X Finance. My name is KC. Between saving and investing I was able to accumulate a net worth of over a million dollars before I turned 30. My Story I graduated from college early in 2000 with a bachelors in … END_OF_DOCUMENT_TOKEN_TO_BE_REPLACED