Life is rarely static and things are constantly changing from year to year and the start of 2013 serves as a great reminder. One item that is often overlooked is the W-4 IRS form. We are most familiar with this form when we start a new job as it is generally required to be completed upon hire. The form is simple, yet the consequences of the number entered can have a significant financial impact.

The W-4 form is simply the form your employer files so it can calculate how much to withhold from your pay for taxes. The reason this is important to keep up with is that as tax events in your life occur it can suddenly cause your previous exemptions to significantly withhold more or less than they should. Nobody likes surprises, and come February or March when you start doing your taxes, finding out that you owe $2,000 when you received a refund last year is a very nasty surprise.

If your income has not changed from last year and you haven’t done anything to significantly change your tax status it is likely you will be fine by keeping your same exemptions. But if you recently got married, had a child, purchased or sold a home, changed or lost a job, received a raise or pay cut, sent a child to college or had significant medical expenses you may need to change your exemptions. On the W-4 form they do have instructions for a worksheet to help you determine what you should select, but an even easier tool is the online IRS Withholding Calculator. 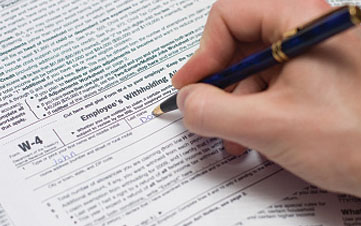 Back in 2007 after reviewing my own situation I discovered that if we did not change our exemptions for 2007 we would have ended up withholding nearly $3,500 less than the taxes we actually owed. That would have been a very nasty surprise come 2008. The reason for this big change from 2006 is because of a few job and pay changes that occurred late in the year. They had little effect on the 2006 tax situation but would have made a large impact over the course of 2007.

It pays to make the changes as soon as possible this year. If you will owe more in taxes this coming year, catching it soon will spread out the additional withholdings over a full year making it less noticeable in your paycheck. Just the opposite, if you were over-withholding, by starting early you will put additional current dollars into your pocket right away which can be saved or applied to debt now instead of letting the IRS hold your money for a year and giving it back to you after inflation has taken its toll on your hard-earned money.

You can always contact the IRS for assistance to know your withholding options. Jeremy is right here to review your W-4 now to avoid trouble later.

The "safe harbor" clause means that you don't have to withhold more in 2007 than you paid in tax in 2006. It doesn't make sense to pay any extra than that as you can just save the money and earn interest on it. But after filing your 2006 return it makes sense to check your withholding for the rest of 2007 is sufficient to cover at least the amount of tax you paid in 2006. It's a little more complicated than this if you are at higher income levels - there then is a step up of the basis from one year to the next.

Do you want to be a millionaire? Would you like to see how I became a millionaire before I turned 30? Hello and welcome to Gen X Finance. My name is KC. Between saving and investing I was able to accumulate a net worth of over a million dollars before I turned 30. My Story I graduated from college early in 2000 with a bachelors in … END_OF_DOCUMENT_TOKEN_TO_BE_REPLACED