In just the past decade or so many investors have been burned. Twice. Those who did a lot of investing in the late 1990s and early 2000s clearly remember the pain as their tech-heavy portfolios tanked in record time. It then took a few years to stabilize, and then a few more years to recover. We only have to look back a few years to see the same thing happen yet again. The stock market rallied for nearly five years starting in 2003 only to once again peak and subsequently crash in dramatic fashion leaving investors wondering why they even invest in stocks at all.

This isn’t anything new. The stock market is always in flux and there are periods of bull and bear markets. Unfortunately, the last decade has displayed some exaggerated bull and bear markets adding more volatility than generations past had to deal with. Ultimately, this extreme volatility and human nature are what cause so many people to lose money and faith in stocks. It’s not that stocks are a bad investment, rather it’s usually the fact that people do the exact opposite of what they have  been taught that causes the pain of losing money.

It’s All in the Recent Headlines

If these stories weren’t so sad, it would be comical. When these articles talk to real investors it can be almost shocking to see the destruction of wealth based on nothing more than poor timing due to human emotion. A common theme can be found in this quote from the most recent story from above:

“It didn’t feel right to be back in until now,” says Richard Dukas, who heads a public relations firm in New York City. “I still don’t want to put all my money in the market, but I believe we’ve come through the worst of it.”

After the 2008 financial meltdown, Dukas and his wife converted their 401(k) retirement accounts into cash. They had been burned during the bubble in technology stocks a decade ago, and Dukas says he has been “extremely skittish” ever since.

Now Dukas, 48, says 85 percent of his portfolio is back in mutual funds, although he maintains a small cushion of cash.

If anything, this is probably the most typical scenario I’ve come across in both my time working with investors and in helping friends and family navigate their investment strategy. Just look at the quote above and you’ll see how poor of a decision that was. First, they waited until after the 2008 financial meltdown before cashing out their stocks. That’s mistake number one. By the time they sold, all the damage had been done and they locked in a 40-50% loss. Second, in the article he says it now feels like it’s finally time to get back in and now has 85% of his portfolio back in stocks. Problem number two is that they let the two best years in stock market history pass them by which would have helped them recover the bulk of their losses, and instead are now buying back in at what appears to be the peak of a bull market. They sold low and are buying high. You can’t make money that way.

The common thread is that in the past six months or so the trend is for more money to be going into stocks than cash or bonds, which has been the trend over the last couple of years. How ironic is that? In 2009 and 2010 the majority of money being invested was by far going into cash or bond assets, yet the market was tacking on gains at a record clip. Today, after the market has bounced back nearly 100% from its lows, it’s only now that investors are feeling comfortable to invest in stocks again. 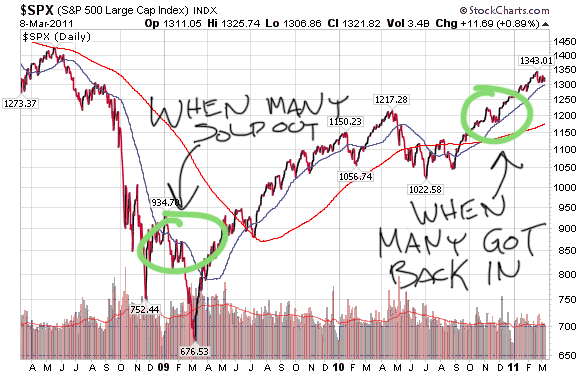 Just like Richard in the article mentioned above, he had seen enough in late 2008 and decided it was time to bail out of the market. Well, as you can clearly see, by the time the end of 2008 rolled around the bulk of the damage had already been done. The S&P was already down between 30-40% at this point. Granted, it still had more downside yet to come and you can argue that selling then missed that, but look at how quickly the market recovered from that ultimate low. Had you not been paying attention to the news a month or two would have gone by and you wouldn’t even have known. And from that point forward the market has been going up sharply.

So, as you look at the chart you’ll notice that 2009 was the year to invest if you had the foresight to invest early in the year. The market rallied close to 65% in just nine short months. That’s unheard of, but guess what? John Q. Public investor missed out. They got shaken by the sharp drop in October of 2008 and bailed out completely, and being afraid of the volatility in the market probably let 2009 and most of 2010 go by before realizing the market rally is real and they should probably get back in. It doesn’t take rocket science to see the problem with these two circles. The “sell” circle is lower than the “buy” circle, and you don’t make money selling low and buying high.

It isn’t just the wholesale selling of stocks and buying back in later that can cause damage to your portfolio. We all know that if you sold after the crash and waited two years after a rally to buy back in that’s a losing proposition, but there’s another layer of missed opportunity here. When most people sold their stocks back in 2008-2009, they also stopped putting new money into stocks (if they were investing at all). That’s what many of those articles referenced above point out, that for those two years the bulk of new money being invested was going to cash or bonds. Well, what a wasted opportunity.

Had you continued to make regular investments in your 401(k) or IRA or whatever you use into your stock holdings during that down period of a year or two you would have racked up a nice amount of money that had an average purchase price well below the peak from just a few months prior. In most cases, that money would have been buying stocks at a 25-40% discount only to then rally in the coming year and earn you a hefty profit. Instead, most people turned to cash or bonds for all of their new money and while stocks were setting record gains, they were content earning 1-5% on their money.

The gains are real. As I wrote about in the lost decade of investing, those who took the tried and true approach of regularly investing over time in a diversified portfolio and rebalanced regularly, came out ahead. While the decade of stocks is “lost” on paper showing a negative total return, a real investor who didn’t make rash emotional decisions and stuck to their guns actually made money in a period where people claim it would have been better to put your money under a mattress.

Lessons to be Learned

“Those that fail to learn from history are doomed to repeat it.” That quote pretty much sums it up because it’s true. Sure, it’s easy to look back over the past few years and see where everybody went wrong. When you’re living in the moment and staring into the teeth of a bear market it can shake even the most astute investor. But as history has also shown, the world didn’t come crashing down and a rash decision often proved costly.

With every market dip there are people who proclaim that this time is different. This is the time where the country goes bankrupt, your cash is worthless, and the best investment is that of guns and ammo. Well, maybe that day will eventually come, but I’m willing to bet that’s far less likely than some would lead you to believe. We’ve had countless market downturns over the past 100 years, each caused by a different driving force, yet somehow we’ve managed.

So, the key here is to learn from history so you don’t continue to make the same mistakes. Don’t wait until the market goes down, sell all of your stocks for a loss, and then wait well into a subsequent rally to buy back in. When you react to what has already happened, you’ve already lost. The only way to make money timing the market is to be ahead of the curve. You need to sell before stocks go down and buy before they go up. For the average investor you’re probably better off going to Vegas and playing blackjack.

The rules haven’t really changed even though the economy has.

It’s that simple, yet adhering to it can be difficult. Ultimately, at the very least you need to diversify. Most people, especially those later in life, are overexposed to stocks. Sure, everybody wants to play catch-up since they got a late start in saving, but taking on more risk isn’t the answer. So creating a portfolio with a solid asset allocation might not be flashy or make you rich overnight, it will do the dirty work of mitigating risk so you aren’t left to your own devices and trying to time the market. Second, you need to continuously invest. When you invest on a fixed schedule it doesn’t matter what the market is doing. Sometimes you’ll be buying low and sometimes high, but in the end you’re going to end up with even more money than if you had been on the sidelines. And finally, rebalancing is important because it forces you to take profits off the table. As the investments in your portfolio do good or bad their proportion gets thrown off your target. By rebalancing you’re then taking profits from the investments that did good and shuffling them into the investments that aren’t doing so good, which is effectively selling high and buying low.

One final thought, and that has to do with Warren Buffett. He’s known for saying, “Be fearful when others are greedy, and greedy when others are fearful.” Since the public is usually the last one to the party, I’m a bit on the fearful side these days. While mainstream media says it’s time to get back in, I’m doing the opposite and pulling some of the profits from the past few years off the table. I don’t move my entire portfolio in and out of stocks like a fool, but in times like these I am extra careful about buying into the excitement.