2008 is going to be remembered as one of the worst years in the stock market, and for good reason. Most major indicies posted losses of 30% to 40% for the year. If you’re invested heavily in stocks, you’re well aware of how badly this reflects on your portfolio.  While the first three quarters of the year were pretty ugly, the declines were relatively slow and steady over the course of time. But in October, we saw the most damage done with a substantial drop and subsequent volatility that really put an exclamation point on 2008. So, just how much of an effect did the 4th quarter have on 2008? 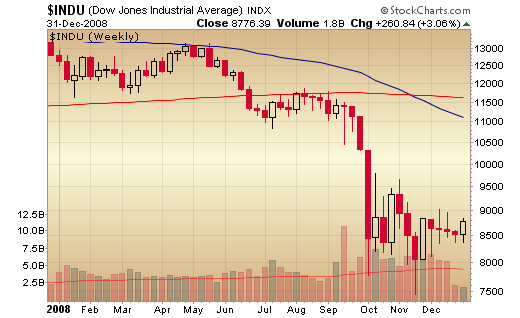 As you can see, 2008 paints a pretty grim picture. We started the year with the Dow up around the 13,000 range, and closed a little under 9,000. But if you look at the chart above, you’ll notice a few things. First is that the early half of the year wasn’t so bad. We did see a decline in up until March, but then quickly recovered most of those losses in just a few months. Then during the the early summer months we experienced a fairly significant drop until things leveled off until late September. And then the calendar flipped to October, which is also the start of the 4th quarter, and things got ugly real fast. You’ll notice that significant drop of nearly 2,500 points in just a little over a week. So, let’s zoom in on the 4th quarter specifically to get a better view. 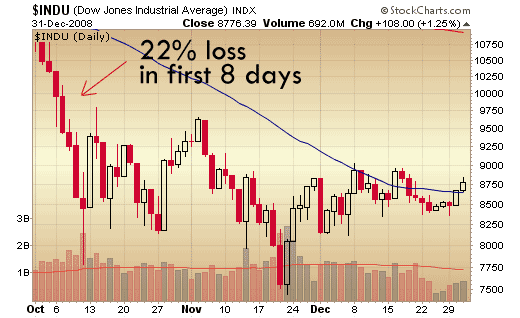 Most statements you receive in the mail are based on a calendar quarter, which means your 4th quarter statement should cover October 1st through December 31st. So, I’ve zoomed in on the DJIA to cover this period, since this is what will ultimately affect your 4th quarter numbers.

Looking at the chart above, you’ll notice that the first few days in October did the most damage. In fact, the first 8 trading days in October the DJIA lost 22%.  Of course, the very next day after that string of losses the market rebounded nearly 10%, but that was only the beginning of what was to become an extremely volatile few months. If you ignore the initial 8 days, you’ll notice that the quarter ended nearly flat, or even up slightly. Of course, ignoring data doesn’t make it go away. But how would your statement look if it started on October 10th? 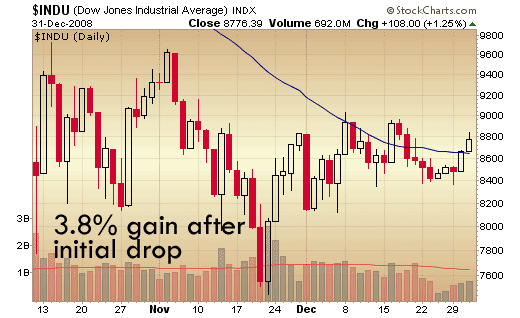 When you subtract the first week and a half, the chart looks completely different. In fact, October 10th through December 31st posted a 3.8% gain. When you get your statement and see a significant loss, you can blame the first few days in October.

Again, the losses are real, and you can’t just wipe out that first week. But I did want to show this breakdown for a reason. That’s because that first week of October shook a lot of people out of the market. By Friday, October 10th, I saw a record number of people coming to me wanting to move everything into cash. That’s fine, you can do whatever you want with your money. But what I like to point out is that if you already waited to see a 20% drop in a little over a week before selling, you missed the boat.

Consider someone who got out on October 10th and put their money into a cash account. How much would they have gained by the end of the year? Probably just a fraction of a percent. Had they left their money where it was for the remainder of the year, they would have made 3-4%, which is much better than the likely 0.5% their money market would have returned. And this doesn’t even take into account the two and a half months you would have been continuing to buy into the market at these relatively low prices. Of course, hindsight is always 20-20, so it’s easy to make that call now.

Look At Your Quarterly Statement With Perspective

Ultimately, a loss is a loss. It doesn’t matter whether a 20% quarterly loss took place slowly over the course of three months, or if it all occurred within a few days, the end result is the same. But, it’s also important to look beyond the number and see why it occurred. If you let a few bad days force a market timing decision, you could miss out on recovering some of those losses by doing nothing. You could also miss out on a lot of buying opportunities if you’re investing on a regular basis through a systematic investing plan such as a 401(k).

This just goes to show you how fast the markets can move, and for most people, by the time you get around to making an investment change, the action is over and you’re late. Without a crystal ball, the best you can do is hope that you’re right. That being said, could we see another year of sharp losses? It’s certainly possible. At the same time, 2009 started out up 3% in just one day. So before you open up that statement and get sick to your stomach, you should look at the big picture. Invest smart. Create a diversified portfolio that you’re comfortable with and invest regularly in all market conditions. If you get worked up about what a few bad days in the market can do to your returns and base your investment decisions on that, you’ll drive yourself crazy, and probably find yourself realizing worse results over the long haul.