Your Home is Not an Investment – Don't Treat It Like One

Your Home is Not an Investment – Don't Treat It Like One

Your Home May Be Your Greatest Asset, But It Still Isn’t An Investment

We’ve been taught over the years that the American Dream is owning a home. Not only that, but your home is your greatest asset and can be used to build wealth. Well, that way of thinking has made a lot of people poor. Real estate has made plenty of people wealthy, but it makes even more people poor. Can you make money buying and selling your home? Absolutely. Can you lose money? As we’ve seen in recent years, that’s an even more likely possibility.

The problem isn’t that real estate can increase or decrease in value over time that makes it a poor investment, but it’s the dangerous combination of people using so much leverage and not factoring in other real world factors that even if the value of their home increases they can still stand to lose money. A lot of money.

An Increase in Home Value Does Not Always Equal Profit

Say you purchase a home for $200,000 and sell it ten years later for $300,000. You just made $100,000 or realized a 50% return. That’s a nice profit, right? Not so fast. While this is what most people dream about when purchasing a home it isn’t that simple. Unless you paid for the entire home with cash, somehow had no property taxes, no homeowners insurance, and no maintenance expenses, you did not earn 50% on your property. Let’s run through a typical example to show where the money is really going.

First, when most people purchase a house they have to borrow money. To keep things simple we’ll work with the old standby rule of putting 20% down and financing 80% so we can avoid PMI. Taking that same $200,000 house as mentioned above we’re now going to drop $40,000 down as a down payment and finance $160,000 at an average rate today of about 5.25%. So, let’s look at the typical breakdown of 10 years of payments on a 30-year fixed mortgage in terms of just principal and interest. 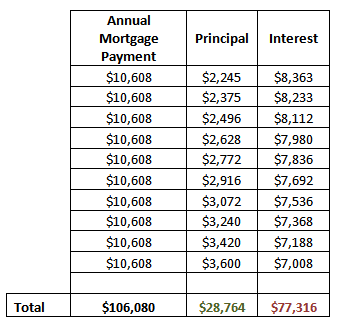 These numbers are rounded and are just using some quick averages for simplicity sake, but you can get a general idea of what those 10 years of payments on that $160,000 mortgage look like. Over that time you will have a total outlay of over $100,000, with just under $30,000 going toward the principal and over $75,000 being lost to interest. Just looking at the numbers we can already see that the $100,000 gain in property value is clearly not going to translate into a $100,000 return on your investment.

Here’s a detailed breakdown of the money spent and the actual rate of return based on total money spent: 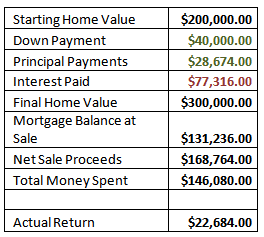 Here you can see where that money has actually gone. All said and done, when you factor in the down payment plus 10 years worth of mortgage payments, you’ve invested over $146,000 into your home. When you subtract the outstanding mortgage balance with the sale proceeds you’re left with just a $22,684 return. That comes out to only a 15.5% cumulative return over 10 years, or just a percent or two average annual return on your total investment. And you thought savings account and CD rates were bad… Here you just had your home increase in value by 50% in ten years that only nets you a 15.5% real return.

The above example was just a very basic example using the mortgage payment vs. purchase and sale price. But that isn’t taking into account all the other real world factors when buying a home. There are a few other things that will affect your total return as well: inflation, property taxes, homeowners insurance, realtor commission, and maintenance. First, let’s look at the inflation adjusted final sale price assuming 3% annual inflation over that ten year period.  With 3% inflation, you’d need to sell your home for $268,783 ten years later just to break even with inflation. Since you sold your home for $300,000 you could say that your inflation-adjusted return is merely $31,217. When you factor in your actual return of $22,684 from above you actually lost $8,533!

What about property taxes? When you buy a home, you’re also assuming property taxes as well. Again, for simplicity sake we’ll say that that property taxes average out to about $3,000 annually. Over ten years that’s another $30,000 of money spent on your “investment.” What about homeowners insurance? Again, you need to protect your investment, and at say $800 annually you can figure another $8,000 or so spent over those ten years. That’s nearly $40,000 in expenses that subtract from your profit.

If we look at an inflation adjusted return of -$8,533 and tack on property taxes and insurance you’re looking at a total real return of -$46,533. That isn’t a misprint. You could sell your home for $100,000 more than you paid for it ten years ago and still end up with a loss of nearly $50,000. Some investment.

But What About Tax Deductions?

Even if by using the interest and property tax deductions gave you an additional $5,000 over the standard deduction that’s only a total tax savings of $1,250 annually at the 25% tax rate. Over ten years that’s just $12,500 which is not nearly enough to offset everything else.

Just the Tip of the Iceberg

The example I used here is just that–an example. There are clearly a number of different variables in play. Depending on how much of a down payment you use, actual rates of inflation, property values, length of time in the home and so on, there are going to be situations where you can actually make money and situations where you lose even more. This is in no way meant to say that buying a home is a bad idea, but it’s merely an exercise to help you look at the whole picture and not get caught up in the idea that even if your home increases in value that you’re going to walk away with some money.

Some will argue that much of this is moot simply because even if you didn’t buy a house you’d still be paying money to rent a place, so even if you can build some equity over time and may get a tax deduction that it’s still a better long-term alternative than renting. That’s a valid argument, but this wasn’t meant to be an argument of renting vs. buying. Instead, it just tries to shed some light on the notion that even though your can seemingly sell your home for much more than your original purchase price, you really might not be making as much money as you think.

Bottom line is that you home is a place to live. If you buy a home with that in mind and enjoy where you live it doesn’t matter if you make money or lose money. Above all else, your home provides shelter and enjoyment. If you can find a way to make money when you sell it, that’s great. But as long as you keep in mind that your home is not much of an investment in most cases, you can keep things in perspective and spare yourself some disappointment.