It doesn’t matter where you fall on the political spectrum, but you probably understand that government spending can be incredibly wasteful. There isn’t a better example than this mailing about to go out from the IRS just to inform people that they might be getting a rebate check later this year. That’s right, the IRS plans on sending out over 130 million letters to taxpayers doing nothing more than announcing the rebate, and reminding people that they need to file a 2007 return in order to be eligible.

And this is just the beginning. The first 130 million letters are going out to those who filed a 2006 return and could possibly be eligible. Still to come are more letters that will be sent out to retirees who receive only social security benefits and some veterans who don’t normally file returns. There isn’t a number available yet, but you can expect that to run into the many millions of dollars as well.

It depends on who you ask, but Keith Hennessey, the director of the president’s National Economic Council thinks so. He argues that these reminders are needed so that people don’t get confused:

Any time you do something as a government tens of millions of times, there is ample room for people to get confused. And so if you’re going to have tens of millions of taxpayers getting checks, you want to get the information out so that you have as few people as possible confused about what’s happening, they understand what’s coming, and it reduces the number of incoming requests that IRS and Treasury have to figure out how to deal with it.

At first glance, yes, this can make some sense. With so many tax scams going on out there, and since we’re telling people to be wary of attempts for people to trick you into getting your personal information, it might seem reasonable to notify people that a check will be coming in the mail. But, is sending a letter to all taxpayers really the answer?

How many taxpayers are completely oblivious to this tax rebate? Could you walk down the street of any city in this country and randomly poll people and find that 50% had no idea there was going to be a rebate? 30%? 20%? I’m willing to bet that a very small percentage of people who actually file a tax return are completely unaware of at least the notion of some sort of rebate check coming and would need a reminder. Of course, this is America, and it seems as if more people are concerned with whether or not Britney Spears is having a mental breakdown than anything remotely relevant.

How $42 Million Could be Better Spent 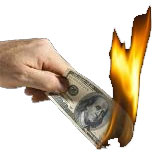 If we’re talking about wasting $42 million on a bunch of mailings that will do nothing more than go directly into trash cans, how could this money be better spent elsewhere? I don’t know about you, but I don’t think this country is perfect. Schools are underfunded, we have poverty and hunger here in the wealthiest nation in the world, drug and crime problems, and even disease. Would a mere $42 million solve these problems? Of course not, but it would be far better spent than on millions of pieces of paper going through the mail.

We shouldn’t forget that we already have a massive deficit, weak dollar, and are moving towards a recession, but clearly the the $42 million cost is justifiable. Yes, that was sarcasm. This shotgun effect is simply throwing millions of dollars away. Out of the 130 million mailings or so, how many of these will actually show a return on investment? One million? Five million? Less? Sure, a few people may actually benefit from this reminder mailing, but it is a guaranteed loss. If you were a business, would you spend $42 million just to recover $2 million on on that investment? Of course not, but this is “free” money provided by taxpayers, so what the hell–who cares if we only recover a small fraction of this “investment.”

I’m curious to see how you feel about this. Do you think it is a justified expense? Could this money be better used elsewhere? If you could allocate this money elsewhere, where would you put it? I’m sure there are plenty of opinions out there, and it should be interesting to see the different points of view.