Investing in the Stock Market Over the Past 10 Years: How Did Dollar-Cost Averaging Fare?

Investing in the Stock Market Over the Past 10 Years: How Did Dollar-Cost Averaging Fare?

Over the past ten years, we’ve experienced a number of up and down periods in the market. We saw some explosive growth as the 1990s closed out only to see the markets pull back sharply for a few years. Then, things recovered and we saw another four year period of growth, followed by the most recent six or seven months or so of another pullback.

Meg over at All Financial Matters wrote a piece that highlighted the fact that the past ten years the markets have not lived up to their expectations. Her data shows that the average annual return over the past ten years for the S&P 500 was just under 4%. This is quite a bit off of the 10-11% average that we usually talk about. And in fact, after taking into account inflation, it appears as if you would be just treading water. In the comments, I had a question regarding what influence the effect of making small systematic investments over time, or dollar-cost averaging, would have on this data over the same period. So, I decided to examine the data and see what I could find. 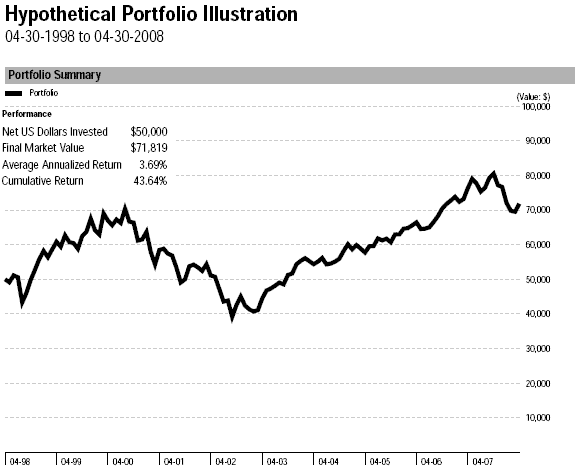 Looking at the lump-sum chart using Morningstar’s hypothetical builder, I made a $50,000 one-time investment in April 1998 in the Vanguard 500 Index (VFINX). As you can see, the data is straightforward. $50,000 had grown to almost $72,000, with the average annual return of 3.69%. Also, I wanted to show the cumulative return as well, which as defined by Morningstar as the total money-weighted return over the period. For the lump-sum, that was 43.64%.

There isn’t anything shocking here, and this looks like almost any 10-year chart for the S&P 500. So, with the benchmark out of the way, let’s take a look at what happens if you were to instead spread the $50,000 investment equally across the same period.

Investing in the S&P 500 With Equal Monthly Contributions 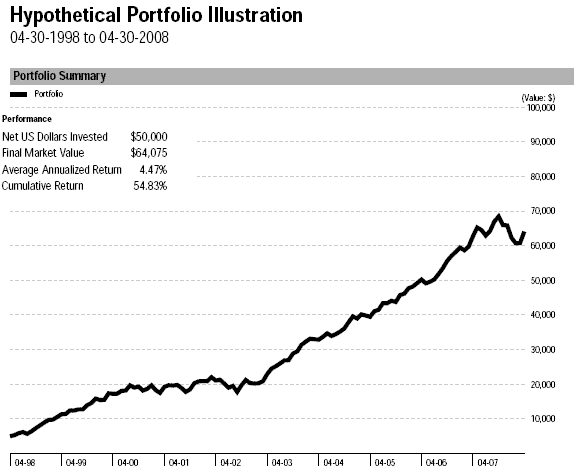 As you can tell, this chart looks much different. For this illustration, I ran the numbers so that in starting in April 1998, a monthly purchase of VFINX of $416.67 was made at the end of each month for the total of the past 10 years, or 120 months. This gives us the same $50,000 invested, but spread out equally. This is a far more accurate representation of what most investors would do.

The first thing you can notice is that the chart is much smoother. Instead of seeing the wild fluctuations that occur with the market, the first five years especially, look much better. When the market was dropping from 2000 through 2002, the market was down between 40-50%, which can be seen in the first chart. With this chart, you can see the same period was actually relatively flat, and even ended slightly higher. Of course, this is due to constantly adding more money at regular intervals.

As far as returns go, you can see that the ending balance is slightly lower than with the lump-sum investment. Here, we’re looking at only around $64,000 as opposed to nearly $72,000. This is because with all of the money immediately invested, it can begin working right away, which will increase (and decrease) faster. But is also  interesting are the average annual and cumulative returns, which are both higher in this scenario. Average annual returns are around 4.5% and a cumulative returns for the period are nearly 55%.

What Does This All Mean?

As it has been discussed before, the bottom line is that you want to put your money to work as soon as possible. If you have a large chunk of cash sitting around to be invested, you’re better off just moving forward and investing it. But, how many of us have tens of thousands of dollars sitting idle just waiting to go to work? That is why it also makes sense to invest as soon as possible even if you don’t have much money. In this scenario, we were only looking at a little over $400 a month, which gets you to $5,000 a year, which is also the IRA limit for 2008.

There is no sense in waiting to save up a large sum of money before putting it to work, as you can see that small regular investments in even the rocky past ten years we’ve had yields very strong absolute returns, and even somewhat better short-term returns and reduces some of the volatility.

Even so, it isn’t always about squeezing every penny out of your returns. Looking at the charts above, let’s assume you’re a relatively new investor who was just getting started in 1998. How likely would it be that you’re in 100% equities by the time 2003 rolls around after losing 40% of your money in a short amount of time with your lump-sum investment? On the other hand, a new investor who is slowly plugging away a little bit of money each month wouldn’t have noticed such a dramatic decline, and is probably more likely to stay true to their investment allocation instead of bailing out to something safe.

Of course, I know none of my readers would make drastic investment changes after experiencing a a bear market 😉