Practical Ways to Break the Bondage of Debt

Practical Ways to Break the Bondage of Debt 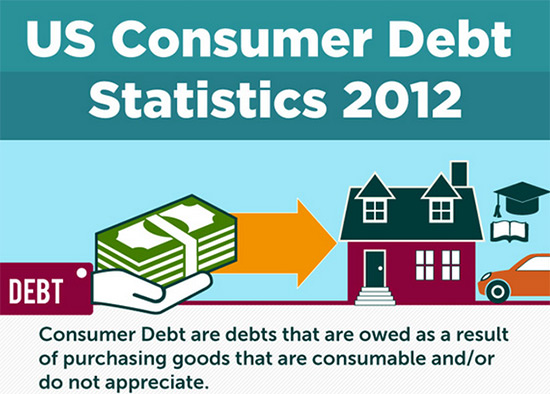 From governments and corporations to individuals, debt is an epidemic. The statistics reported by The Credit Examiner paint a grim picture of the America’s financial health. Americans owe a collective $11.38 trillion. $8.15 trillion in mortgages, $914 billion in student loans, $852 billion in credit card debt and $72 billion in auto loans.

Let’s break it down even more. Total student loan debt was up 7.35 percent in 2011 with the average debt per student coming in at $34,703. One in five U.S. households includes at least one person carrying student loan debt.

Infographic by- The Credit Examiner

Anybody crippled by debt knows the effects. There’s little room for saving and that affects retirement, saving for education expenses, and building an emergency fund. You can’t budget for debt. You simply have to pay it and build your budget around your debt payments.

Debt causes stress on relationships. The New York Times reported that couples who routinely fight about money are 30 percent more likely to divorce. (And, we can be relatively certain that those fights aren’t centered on what to do with their vast riches.)

Here’s another effect that isn’t talked about enough. Debt takes away your ability to give to others. In 2011, Americans gave $347 billion to charity—a 7.5 percent increase from 2010, according to NBC News. But that’s nothing compared to the needs around the world. What if only a fraction of the $11 trillion collective debt load went to charitable causes around the world?

If you’re somebody with the average credit card balance of $15,328, you would pay about $22,000 in interest if you only paid the minimum each month. What if you had been able to donate even 10 percent of the interest payments to a charity of your choice? What if everybody like you did the same thing? What if, instead of a credit card company getting your money, a Third World nation filled with hungry children got it?

Let’s get serious about paying off debt. Here are a few practical ways to make headway on your debt load.

Now that 50 percent of those graduating from college are either unemployed or underemployed and college tuition inflation is generally double the rate of general inflation, financial experts want you to borrow only an amount equal to your first year’s salary.

That will likely mean making tough choices on your school of choice. A state school costs considerably less than a private out of state university. Your school of choice has an impact when interviewing for some jobs, but if you’re like the majority, amassing a large student debt load isn’t going to improve your job prospects enough to justify the costs.

However, for those already holding a large amount of debt, first examine your consolidation options. Even a small reduction in the interest rate reduces your total payments considerably over time. Second, some people are eligible for significant principal reduction or forgiveness of their balance if they are working in a qualified position while making 120 on-time payments.
Because you receive a deduction of up to $2,500 on your student loan interest, dedicate a portion of your tax return to the payment of debt. Go to the IRS Website for more information. Finally, pay the minimum until you pay the higher interest debts like credit cards and car loans.

If you have multiple cards with high balances, first consolidate. Roman Shteyn, co-founder of Credit-land.com says, “If you have several cards with balances, the first thing you should do is consolidate them onto one card, preferably a card with a 0 percent balance to give you time to pay down the debt.

These cards can give you up to 18 months interest free, which lets you greatly reduce or eliminate the actual debt and you don’t have to worry about the interest it is accruing each month.” Use this balance transfer calculator to help make informed decisions whether a balance transfer will enough to justify the work of transferring balances. The key to this strategy is to commit to eliminating or significantly lowering the balance during the time you are not paying interest.

There’s also the Debt Snowball plan made popular by personal finance expert, Dave Ramsey. Make only minimum payments on all but the credit card with the highest interest rate. On that card, pay as much as you can. Once you pay that card off, pay off the next highest interest card using the money previously applied to the now paid-off card.
By the time you get to the final card, you’ll have enough money left over to make sizable payments.

As with all debt, the best offense is a good defense. Do not purchase more car than you need and if you’re in debt, what you need is a reliable car with four wheels and an engine. If you’ve had a loan for multiple years, look for a lower rate. Many consumers don’t know that they can refinance car loans.

If you have a loan, and you purchased more car than you needed, consider trading down. How about a reliable used car that saves a considerable amount in payments? While you’re at it, if possible, downsize to save on gas and use the savings to further pay down debt. Debt reduction is about looking for savings opportunities and getting drastic. However, small reductions in expenses add up to more money going towards debt payments.

Regardless of how dire your financial situation looks, there’s a way out, but it’s going to take drastic action. You have to set aside all of your wants and purchase only the needs. And you have to redefine what a need is in your life. (Is an iPhone a need? Is expensive cable TV a need?)

Once you get to the point where you have extra money in your budget to pay more toward your debt, the savings will multiply. As you pay less in monthly interest, you’ll have the ability to make larger payments. Start small and know that every dollar that goes toward your debt is a milestone.

For more information, contact Gerrid Smith, CEO of the charity-focused coupon website, Save1. They provide coupons and deals from over 5,000 online stores. Each time a coupon is used, they provide a meal to a child in need. You can connect with Save1 on Twitter, Facebook and Google+.